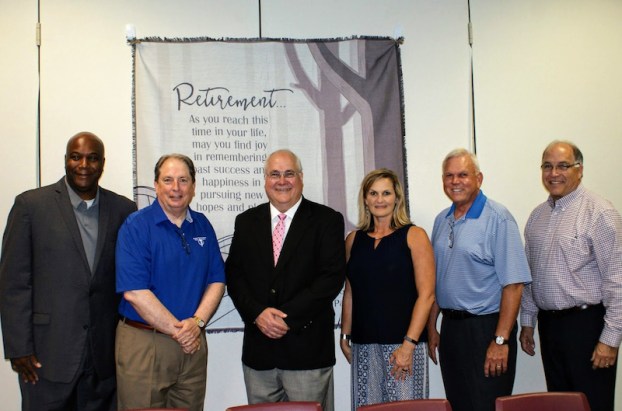 COLUMBIANA–After serving as the chief school financial officer of the Shelby County School System for more than 13 years, Gary McCombs time has come to a close after retiring from his central office position in late June.

McCombs showed some emotion while reading a letter addressed to board members and Superintendent Randy Fuller at the Shelby County Board of Education Meeting on June 26.

“I’d like to say to the board members and superintendent that over the past 13 years it has been my honor to serve the Shelby County Board of Education as your chief school financial officer,” McCombs said at his final Shelby County Board of Education Meeting. “Together we have been able to obtain financing and manage resources to build Calera High School, Chelsea Park Elementary, Forest Oaks Elementary, Helena High School, Helena Middle School and numerous classroom additions and building improvements across Shelby County. We encountered the birth of two city school systems in 2013 and 2014, however, we remained diligent to our vision to be the model of excellence in education. I leave the system in sound financial condition and my role now comes to a close at the Shelby County Board of Education. I wish the next management team Godspeed as they prepare the system for future successes.”

McCombs served the school district beginning in February of 2005 and pointed out that with all the success the system has seen, there were certainly challenging times in the last 13 years.

“Our progress hasn’t been without challenges such as the great recession of 2008, proration of 11 percent in 2009, 9.5 percent in 2010 and 3 percent in 2011,” McCombs said. “Even through these grueling economic storms, we’ve managed to remain strong financially during 2012 and after 2012, management prepared us for the future.”

During the superintendent’s report at the June 26 board of education meeting, Fuller paid tribute to both McCombs, as well as retiring Shelby County Schools Deputy Superintendent Tom Ferguson.

“As an educator, there are many milestones that you face as you move along. As a central office employee, one large milestone that is always there and you look forward to is your last board meeting…” Fuller said with a laugh. “We have two gentlemen that have spent their whole career doing everything they can to support education at all levels and making sure our system has been one of the top systems in the nation. They did it in different ways, but they were always there collaboratively to support what we do as a board, a central office and school system. I just want to take this opportunity publicly to thank them for all the years that they were here. I want to congratulate you on this last milestone, your last board meeting as an educator.”