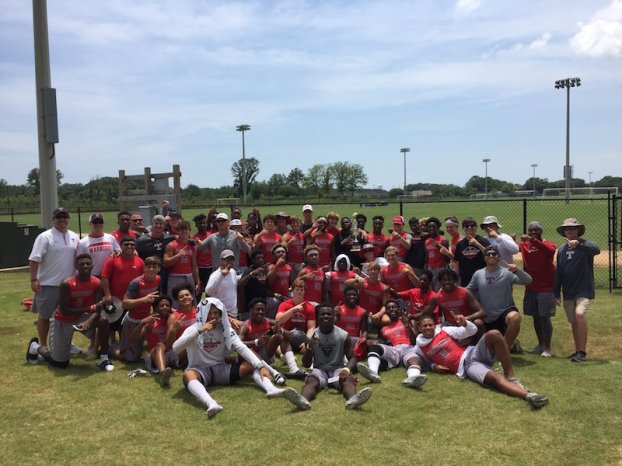 The Thompson football team won its second 7-on-7 football tournament in as many weeks after going 7-1 at the Foley event with backup QB Sawyer Pate. (Contributed)

FOLEY – For the second 7-on-7 event in a row, the Thompson Warriors’ football team came out on top with a win at the Foley 7-on-7 tournament held on Saturday, June 30.

It marked the third time in three major events this summer that the Warriors had finished inside the top two as their impressive summer run started with a second place finish at Auburn University’s 7-on-7, followed by wins at the University of Alabama’s 7-on-7 event and the Foley event.

While these summer showdowns don’t necessarily give you an exact look at what to expect during the season thanks to no pads, no run game and no big battles in the trenches, it does serve as a confidence booster for teams as we inch closer to the 2018 football season.

For the Warriors, that confidence is coming from the competition they are beating at these events. With nationally ranked region foes Hewitt-Trussville and Hoover both competing in the events, it’s given Thompson the belief that they can hang with two of the best teams in the country to repeat as region champions this season.

That confidence boost was even bigger at the Foley event, as THS was able to go 7-1 in the rain-shortened event to bring home the title despite missing star quarterback Taulia Tagovailoa, who was in Dallas, Texas for The Opening, competing to be named the best quarterback in high school football.

In stepped a guy people outside of Alabaster know little about, Sawyer Pate.

Pate, also a star on the baseball team, is a junior at Thompson and the future once Tagovailoa exits high school at the end of this season.

While Pate could sit back and kick himself for being behind one of the best quarterbacks in the country, he has instead taken advantage of it, something head coach Mark Freeman has raved about many times.

Pate and Tagovailoa have become close since the starting quarterback moved to Alabaster last year. Both know what each can do for the other, and they are making the most of it.

Tagovailoa knows he has the chance to be a leader and help prepare Pate for when he becomes the guy, while Pate wants to learn as much as he can so he can step into the spotlight and wow people with his talent, should he need to go in this year or once he becomes the starter next year.

Although several of Hewitt-Trussville and Hoover’s best players were also at The Opening, to lead Thompson to a 7-1 record in a tournament featuring several of the state’s best teams shows not just the talent Pate has, but the talent of the team that was able to step up around him and the relationship they all have to play as one no matter who the quarterback is.

On the first day of the tournament, Thompson went 4-1 losing one pool-play game to Baldwin County by a final of 22-19 after some late heroics by the Tigers.

That was the Warriors’ only set back of the tournament, however, as they went on to take down Hewitt-Trussville, Holy Cross and McGill Toolen on the final day of competition to reach the championship before rain canceled the rest of the event.

Thompson was still declared the winner as the team they would have matched up against would have needed to beat the Warriors twice.

Now sitting at 2-1 in 7-on-7 events this season, THS will compete in their next event on Thursday, July 12, at Samford University.