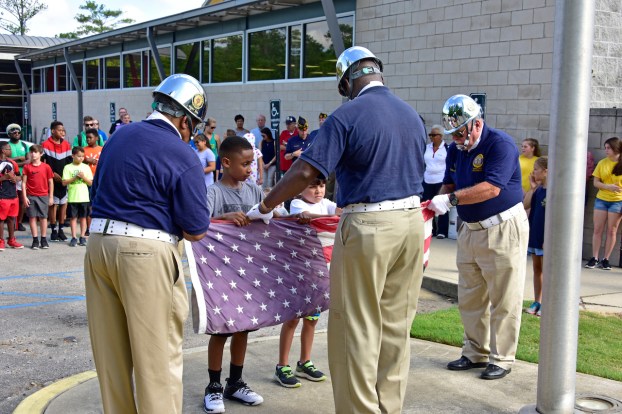 PELHAM – More than 100 YMCA staff members and day camp participants gathered around the flagpole at the Pelham YMCA on July 5 to watch American Legion Matthew Blount Post 555 replace a torn and tattered flag.

Despite the warm weather, the ceremony was a success and included the playing of bugle calls, the national anthem, reciting the Pledge of the Allegiance and hands-on participation by the children.

“This was definitely our largest crowd and we changed things up a bit by allowing the children to be more involved in the process,” Paschal said. “Some of the kids helped fold the flag, so I think that made it a lot more fun for them.”

At the end of the ceremony, Exchange Club of Shelby County board member Brenda Walker gave miniature American flags to the children and led the Pledge of Allegiance.

Post 555 Flag Detail members Jerry McClain, Charles Geter, Robert Horsley and Nancy Waller performed the ceremony, which takes 10-15 minutes, and Paschal explained each step of the process to the audience.

In addition to replacing an old flag, the Post 555 used the event to educate the children about the U.S. flag.

“This ceremony was a little more special for several reasons: it was during the week our nation celebrate Independence Day, and it included an educational program for the kids with a question and answer segment and three of the YMCA Summer Day Campers assisted with the folding and transporting the worn flag,” Post 555 Commander Tom McDaniel said.

The American Legion Flag Reward Program exists to allow post members, friends, neighbors, local schools and businesses that choose to sponsor Post 555 the opportunity to buy their flags from the American Legion. When a school or business contacts Post 555 to conduct a flag replacement ceremony the post will provide the appropriate sized American made flag. However, Post 555 does request that a donation be made to the post.

The event marked the 23rd flag replacement ceremony in Shelby County and its surrounding communities.

For more information about the American Legion Flag Reward Program, contact the Legion at alpost555.com/honor-guard or the flag team coordinator Ron McGriff at FlagDetail@alpost555.com.