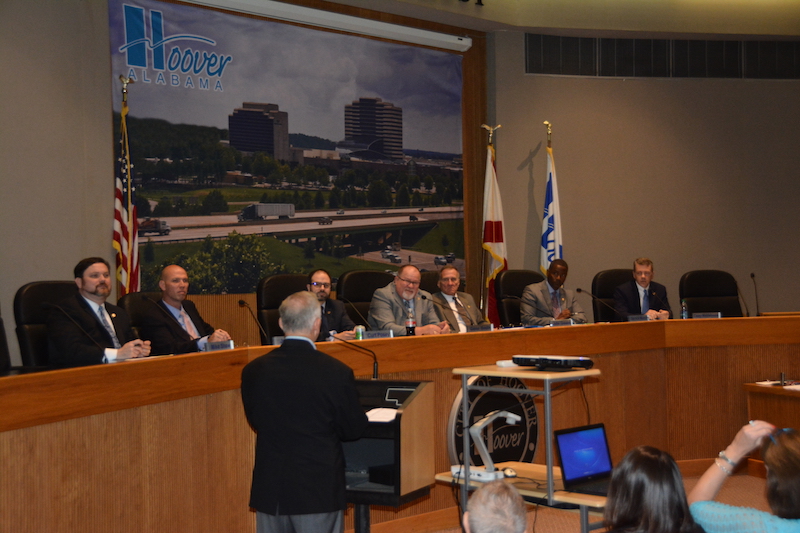 A representative of the Homebuilders Association of Alabama addresses the Hoover City Council regarding proposed rental and leasing tax increases during a July 10 meeting. (Reporter photo/Amalia Kortright)

HOOVER- The Hoover City Council voted on several ordinances to raise taxes in the city during a special-called meeting on the evening of Tuesday, July 10.

City Council President Gene Smith said the decisions voted upon during the meeting were difficult to make, but each council member voted based on what they felt was best for the community.

“Obviously, none of us enjoy needing to be here tonight. This is something that the council and the mayor have been working on since the first of February,” Smith said. “I don’t enjoy any votes that I will cast tonight, and I don’t know that any members, whether voting for or against, are going to enjoy what they’re needing to do tonight.”

During the first item of business, the city voted in favor of adopting an ordinance that would increase sales tax by 0.5 percent effective Oct. 1. In the portion of Hoover that lies in Shelby County, the sales tax rate will be 8.5 percent.

City council member Mike Shaw made a motion to table the ordinance until the city completed a budgeting process before voting on the ordinance.

Other council members voted against the motion, and the ordinance passed by a 4-3 vote.

The city voted in favor of adding a $2-per-night room fee in the city’s hotels and motels, effective Jan. 1, 2019. The ordinance passed on a 4-3 vote. The city also voted to withdraw a proposed ordinance that would have increased the city’s lodging tax from 3 percent to 6 percent.

The city also adopted an ordinance that amended its Municipal Code regarding the city’s personal property tax. The tax increased from 3 to 3.5 percent, effective Oct. 1, and was also voted in on a 4-3 vote.

Hoover Revenue Director Frank Lopez explained that personal property taxes are basically taxes on items that are leased instead of borrowed.

After the meeting adjourned, Cresswell described himself as “not happy, but not devastated” with the council’s decisions.

“Though I hate the shape we’re in, it’s imperative that we have top-notch police and firefighters,” Cresswell said.

Mayor Frank Brocato commended the city council for voting on the tax increases, and said they will help fulfill several of the city’s needs.

“Hoover’s back. Tonight, our council stepped up in the face of adversity. They recognized that we had real needs in our city, and I applaud them for taking a stand,” Brocato said.

Brocato said the tax increases are expected to bring in about $11 million in yearly revenue for the city.

“This is not giving us an open checkbook. We will continue to be good stewards of the money that we’ve been given. We will continue to look for efficiencies and make sure that we’re doing the things that any Fortune 500 company would do when they find themselves in our position,” Brocato said.