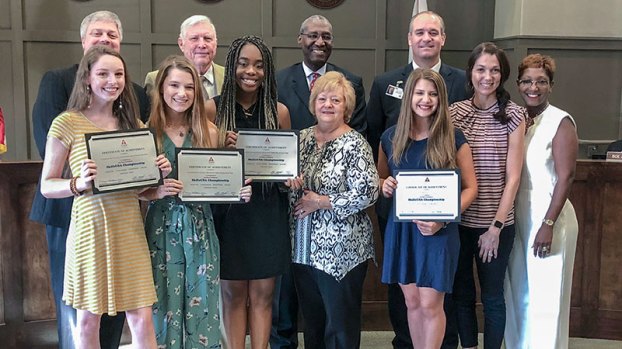 Alabaster Board of Education members honor the four members of the THS TV broadcast news production team during a July 9 meeting after the team placed highly in a recent SkillsUSA competition. (Reporter Photo/Neal Wagner)

ALABASTER – Four Thompson High School broadcast journalism students recently placed sixth in the nation while competing against teams from across the country at the SkillsUSA national competition in Louisville recently.

The THS TV team competed in the broadcast news production category during the SkillsUSA national competition in late June.

Teams were evaluated on their broadcast-writing ability, voice quality, diction, timing and pacing and performance techniques.

Members of the Alabaster Board of Education honored the four THS TV members during their July 9 meeting for their solid performance at the competition, and for winning the state SkillsUSA competition earlier this year.

“Sixth-place in the nation is outstanding work, but it’s no surprise,” said ACS Superintendent Dr. Wayne Vickers. “This team is very used to winning state championships each year, but it looks like you’ll be competing for national championships year after year.

“Congratulations and outstanding job to you and your sponsor,” Vickers added.

The following students were on the THS TV SkillsUSA broadcast news production team: