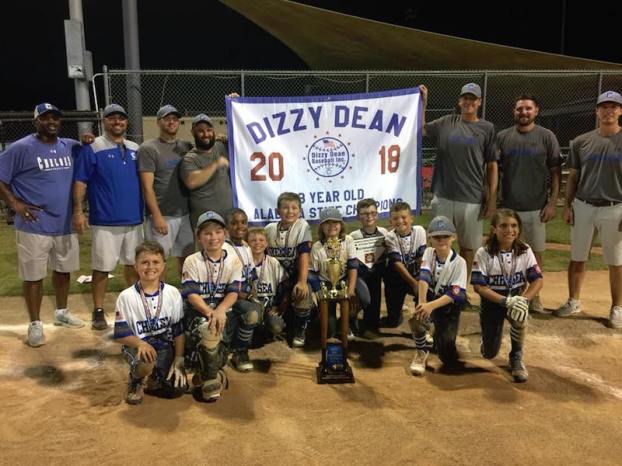 Chelsea brought home the 2018 8U Dizzy Dean Alabama State Championship on Tuesday, July 10, after taking down Shelby County in the title game. (Contributed)

SCOTTSBORO – The only two teams out of 10 different age divisions to make a state championship at the 2018 Dizzy Dean State Tournament both came from the same 8U age group.

Both Chelsea and Shelby County’s 8U teams battled through a double elimination bracket to square off against one another on Tuesday, July 10, for the state championship and the rights to earn a trip to the Dizzy Dean World Series in Southaven, Mississippi, later this summer should they choose to go.

Both teams played extremely well throughout the tournament, especially early on, but in the end, Chelsea was playing at the top of its game and beat Shelby County twice between the semis and the championship to claim the title and earn its spot as the 8U state champs.

Through the first three games of the tournament, Chelsea took down Madison, Southside and Odenville to reach the semifinals undefeated.

Just as impressive, Shelby County Moody, Jackson County and Alabaster to start the tournament 3-0 as well.

That pitted the two undefeated teams against each other in the semifinals with the winner advancing to the championship game as a heavy favorite in the winner’s bracket and the loser moving to a must-win situation in the loser’s bracket that would have forced three consecutive wins to bring home the championship.

Chelsea’s hot bats and strong defense continued in the game, which ended up leading to a 9-1 victory to punch the team’s ticket to the title game with an undefeated 4-0 record.

While Shelby County fell in the game, hope wasn’t loss. The team dropped into the loser’s bracket and showed their resilience.

Just before the championship game, Shelby County squared off against Southside looking to pick up a win and get a second crack at Chelsea. Shelby County did just that with an impressive win to keep its title hopes alive.

Chelsea, however, was a train that couldn’t be stopped and only needed one game to close out the championship on Tuesday night.

It would have been an uphill climb for Shelby County, who needed to beat Chelsea twice to claim the championship, but despite the loss, their run was no less impressive and gave local fans from Chelsea and Columbiana the chance to see two teams separated by just a few miles compete for a Dizzy Dean Championship.

It was an impressive championship run for Chelsea, who finished the tournament a perfect 5-0, showing an impressive level of consistency from the young players.