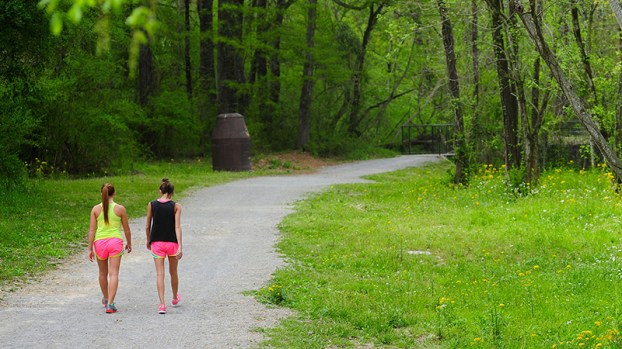 Alabaster’s Buck Creek Trail, pictured, will soon see a significant extension through a partnership between the city and Shelby County. (File)

ALABASTER – Shelby County and the city of Alabaster are preparing to extend the Buck Creek Trail through Warrior Park and to the Alabaster YMCA building, as a major prerequisite to the project was recently completed.

Shelby County Manager Alex Dudchock during a July 9 work session gave city leaders updates on several projects the county has partnered with the city on, including plans to significantly extend the Buck Creek walking trail.

Currently, the Buck Creek Trail begins at Buck Creek Park off Sixth Avenue Southwest and travels along the banks of the creek before ending at Warrior Park near Depot Street. Plans call for the trail to be extended along Depot Street, under the newly widened Thompson Road bridge over Buck Creek and on to the Alabaster YMCA building off Plaza Circle.

The county previously installed a bridge over a tributary creek bed near the YMCA’s athletic fields, which will serve the trail once it’s extended.

When the extension project is completed, the entire Buck Creek Trail will be a little more than 2 miles long, Dudchock said.

The project can now move forward since the widened bridge on Thompson Road allows more overhead clearance for the trail – about 7 feet – than the old bridge.

Dudchock said the extended trail will make the area much more walkable, and will connect many resources in the central part of the city.

“This meets all of our goals of walkability and green space,” Dudchock said.

CALERA – A Columbiana woman was arrested in Calera after entering the loading docks of a business, armed with a... read more