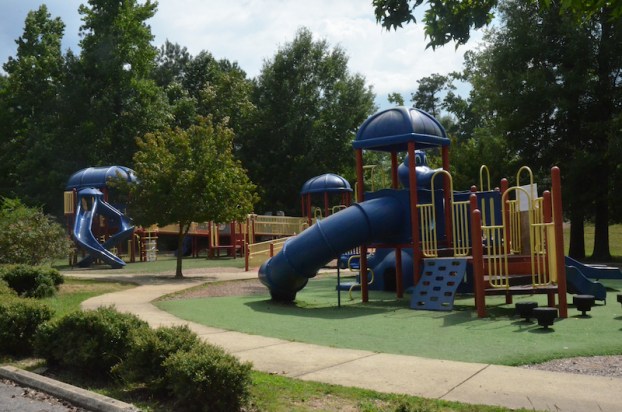 The city of Helena received an $8,000 grant from the Alabama Association of Resource Conservation and Development that will help replace boundless playground equipment at Joe Tucker Park. (Reporter Photo/Graham Brooks)

HELENA–Joe Tucker Park will see some improvements to the boundless playground equipment, thanks to a grant that was approved at the Monday, July 9 Helena City Council Meeting.

The Community Development Fund Grant comes to Helena in the amount of $8,000 from the Alabama Association of Resource Conservation and Development.

The grant was discovered by State Sen. Cam Ward, R-Alabaster while serving on the appropriations committee. Ward felt that the city of Helena could put the grant to use and called Helena Mayor Mark Hall to see if there was a need.

“I was told there was a grant for the area but nobody had asked for it so I asked for it,” Ward said at the July 9 Helena City Council Meeting. “The Resource Conservation and Development delivers grants and when we have a little extra money for projects we want to put those to use. The mayor and I talked and $8,000 later we’ve got some money to improve Joe Tucker Park.”

The city of Helena knew that several of the boundless playground equipment would need to be replaced at Joe Tucker Park totaling close to $10,000 and the grant will help fill that need.

“We were trying to find a way to replace the equipment but Cam called and said, ‘Hey I’ve got you a grant that you could probably qualify for if you have something in your department that needs to be fixed,’” Hall said. “I said ‘Oh wow this is a Godsend’ so as usual Cam came through for us and got us the grant that will help us tremendously. We just want to thank you for coming through at a time when we need it most.”

In other business, the Helena Council approved Resolution 07092018 with the Shelby County Highway Department for a caution light service agreement at Shelby County 91 at Hillsboro Parkway, approved funds for the 2018 10U Helena Rage All-Star Team for competing in the 2018 All-Star World Series in Gulf Shores and approved changes to member of the Helena Historical Preservation Committee.