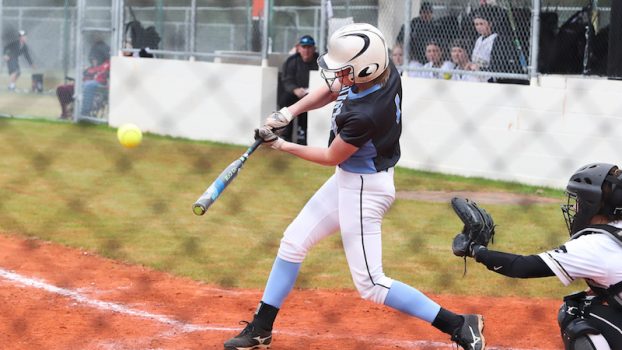 Maddie Majors, above, and teammate Annabelle Widra were both named softball All-Americans after strong 2018 seasons. (File)

Spain Park was one of six schools in the country to have multiple players named to the NFCA High School Softball All-American team, after Maddie Majors and Annabelle Widra were named to of the 48 best high school softball players in the country.

The impressive aspect is that with Widra just ending her freshman season and Majors just ending her junior season is that both will return to the starting lineup for Spain Park in 2019.

While they were split up on the All-American team, just slightly, both were joined together locally on the All-County team after dominant seasons for the Jaguars.

Widra was named as a first-team pitcher and was also announced as one of the two 2018 Softball Players of the Year in the county.

One of the most impressive parts of her game that put her over the top was her strikeout total. She not only led the county with 264 strikeouts, she finished close to double ahead of the next closest strikeout total in the county.

The year before, as an eighth grader, Widra was just as jaw-dropping and posted 272 strikeouts, giving her a total of 536 strikeouts with three years still left at the school.

It also marked the second consecutive year that Majors was named to the All-County First Team thanks to a season that featured a batting average of .477. She ended up finishing the year with the third most hits in the county at 73, including 16 doubles and nine home runs, which led to 47 RBIs.

It was a nice follow up to her sophomore season where she led the county with 87 hits and a batting average of .518.

Both will return next year and look to top the impressive marks they have set the last two years by bringing home Spain Park’s first state championship in school history.

The NFCA High School All-America teams are selected by a committee of member head coaches from the pool of players who earned first-team All-Region recognition in the five high school regions. The three 16-member squads had representation from 19 different states.

By ALEC ETHEREDGE | Sports Editor SCOTTSBORO – The only two teams out of 10 different age divisions to make... read more