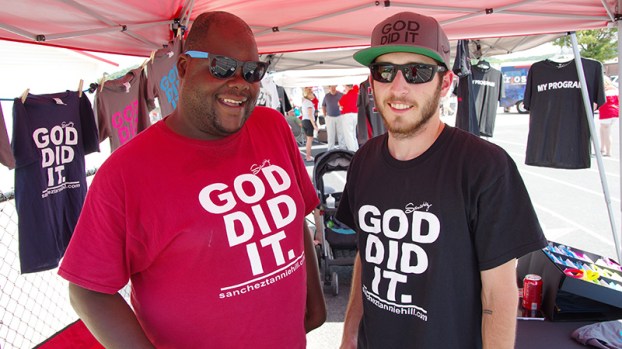 Alabaster resident Sanchez Tanniehill, left, shown here with his friend Jordan Myers, will launch his book “God Did It” in late July. (File)

ALABASTER – Sanchez Tanniehill, a well-known local gospel singer and performer who makes regular appearances at festivals throughout the region, will launch his inspirational book in late July, and is inviting the community to celebrate with him.

Tanniehill recently received confirmation his book “God Did It” is ready to ship, and is now available for pre-order on sites such as Amazon, Barnes and Noble and Books-A-Million.

The book’s publication marks the end of a several-year journey for Tanniehill, who said he wrote the book to share his story with others in the hope it would serve as an inspiration for those facing hardship.

The biography will outline the struggles Tanniehill has overcome in his life, which are many. At just 6 weeks old, Tanniehill suffered a stroke, and doctors told his family members he likely would not walk or talk as he got older. Following the stroke, Tanniehill developed spinal meningitis, causing him to spend three months in the hospital.

Tanniehill describes the book as “lovingly dedicated to anyone who is losing hope in the idea that God can do something in their impossible situation. I pray my story of overcoming a stroke at 6 weeks old will inspire you to hold on to faith that – one day – you’ll be able to look back on your life and say ‘God did it.’”

To celebrate the release of the book, Tanniehill will hold a public release party at the Jacob’s Corner event center at 105 Plaza Circle in Alabaster from 2-5 p.m. During the event, Tanniehill will have copies of the book available, and will sign copies for those interested in having an autographed version.

To learn more about the book, or to pre-order a copy, visit Sancheztanniehill.com.