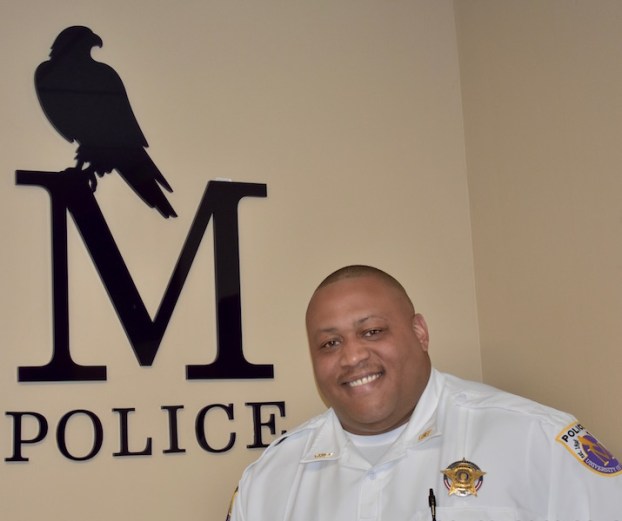 The new chief of the University of Montevallo Police needs no introduction . . . in fact, you’ll have a hard time finding anyone in Montevallo who doesn’t already know Tim Alexander.

His family goes back several generations in the city.

You know that mural on the side of the It’s About Time barbershop? The one across Owl’s Cove Park from UMOM? The man driving the truck in that 1920s Montevallo street scene is Alexander’s great-grandfather Virgil Smitherman.

He came up without a lot of frills. He and his mother, Deloris Lucius, lived in the Scott Village housing project near Montevallo Middle School.

Since then, he graduated from Faulkner University, worked as a jailer, a deputy, a patrolman and a supervisor; served on special assignment to the DEA; and has stayed involved with the Explorers. Currently, he is working on a master’s degree in criminal justice administration.

As a captain with the City of Montevallo, Alexander, at the young age of 40, could be fairly certain he would soon be a police chief somewhere.

“But this is my city,” he said. “Anybody can go away to go to work. It’s more of a challenge to stay home.”

And Alexander rarely turns away from a challenge.

Just after graduation, Alexander won the Explorers’ Jeff Leduff Award for overall excellence at a regional conference in Gulfport, Miss. That cemented his ongoing involvement with Explorers, and Alexander serves now as the president of the Alabama Law Enforcement Explorer Advisors Association.

Fittingly, official announcement that Alexander would be the new UM chief came during the Explorers Academy that was on campus in June.

He replaced Chadd Adams, who resigned in February after the Reporter revealed Adams had been charged with DUI in Alabaster.

Besides via police matters that cross the desk of a campus police chief, Alexander is interested in getting to know the UM students.

“This job gives me the opportunity to talk with young people,” he said. He wants more participation in the UMPD-led self-defense classes. Some teaching is not out of the question — “anything I can do to impact young minds, especially right now with the way society sees law enforcement.

“My grandma (Pearl Alexander) used to tell us: ‘Your name will get there before you do’ and ‘be the change you want to see.’”

Alexander lives by those words: He serves on the board of Shelby Emergency Assistance, and has received Montevallo’s Hometown Hero Award (2013) and the Chamber of Commerce’s Civic Leader of the Year (2017).

Alexander has one grown daughter, and he and his wife have two younger ones.

What’s next? “I think I want to write a book,” the new chief said.

By NANCY WILSTACH / Community Columnist You know those Bible verses? The ones that priests and preachers use in sermons when... read more