COLUMBIANA – Guests at the South Shelby County Chamber of Commerce’s Membership Luncheon at Columbiana First Baptist Church on Tuesday, July 12, learned about the history of the Birmingham Barons from the organizations corporate sales manager. 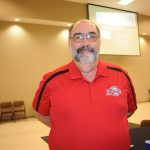 His history with the Barons actually dates back to the early 1980s when he managed the scoreboard at Rickwood Field, the oldest ballpark in America. But, in 2012 he was hired on as the corporate sales manager.

Leo has held various positions in the sports world, including working with NASCAR driver Davey Allison when he was the director of NASCAR operations for the Texaco/Havoline Racing team.

When it comes to baseball, his relationship with it goes back to when he was a little boy going to Atlanta Braves games with his dad. But it’s the Rickwood Field holds a special place in his heart.

“When I go there (Rickwood Field), I sit there at the front gate, and I can imagine my grandmother, my grandfather and my dad as a little boy going to Rickwood Field, because I know they did,” Leo said. “I know they came through those gates, because at that time, that’s really all you had.”

Leo educated the audience about the history of the Barons organization, which was established in 1885. The team’s 2013 season marked its first season back in downtown Birmingham in 25 years. Leo said that first year back was incredible. In the 2013 season, the Barons made the playoffs and won the Southern League championship.

“It was a magical year,” Leo said. “You couldn’t have asked for a better year than the first year there.”

Currently, the Barons average a crowd of 400,000 to 500,000 spectators on an annual basis and Regions Field hosts about 190 events per year that are unrelated to baseball, including weddings and receptions and bar mitzvahs.

Leo said Birmingham has become the place other cities look to as a model for creating a successful minor league baseball franchise.

The park is preparing to host its first concert on Aug. 30 when country artist Jake Owen comes to the Magic City. College Football Night will be Aug. 17, and on Aug. 18, 200 women will have a shot at winning a diamond valued at $4,000, courtesy of Diamonds Direct, during an event called the Diamond Dig.

For more information about the Birmingham Barons and upcoming events, visit Barons.com.