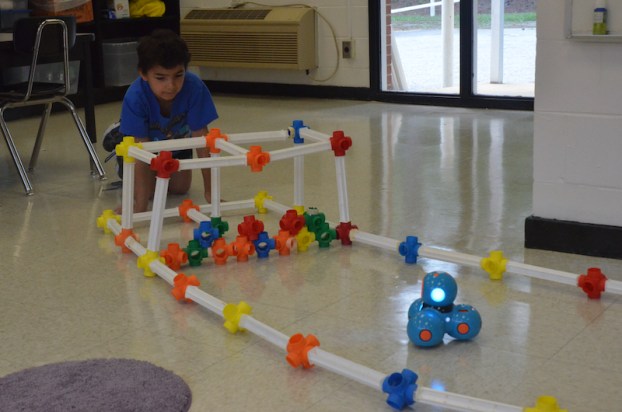 Students attended the Creation Station Summer Camp the week of July 9 at Helena Elementary School where they learned a variety of skills. (Reporter Photo/Graham Brooks)

HELENA–There was no shortage of technology the week of July 9 as several young students headed to Helena Elementary School to take part in a five-day Creation Station Summer Camp.

Using several different stations, Shackelford had the camp set up so students could switch from robotics, to coding, to movie making. For two hours each day, the camp was designed to get students thinking and to be creative.

“We used a robot named Dash who uses code to make different movements,” Shackelford said. “They built a track and once they learned how to code the robot they could use an iPad to teach him the movements on the track. As for other things in the camp, we have used a green screen to make movies and used Osmo that uses a mirror on an iPad to play different games.”

Rising fourth grader Mallory Puckett attended the camp the week of July 9 and said she learned several things in the short span of time.

“Coding has been my favorite part of the camp,” Puckett said. “One of the things I learned was that I didn’t know you could do so much with coding. We’ve been using Stop Motion and American Girl Dolls to make our own movie.”

There are a few more opportunities available for students to attend summer enrichment classes before the summer comes to a close.