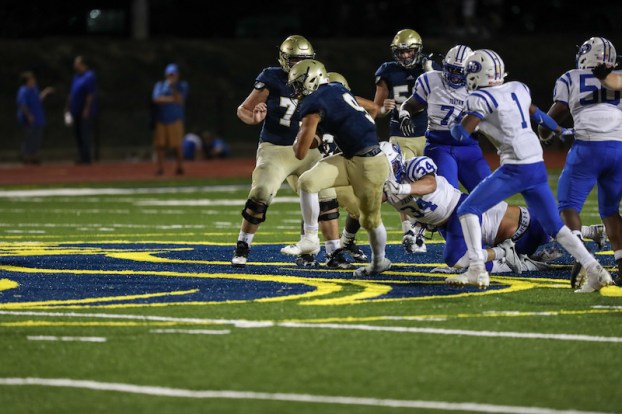 Briarwood’s football team was ranked No. 6 in the National Athletic Association of Private Schools preseason poll on Saturday, July 14, after finishing 2017 with a record of 14-1. (File)

After finishing 14-1 a season ago and one play away from the Class 5A State Championship, the Briarwood Christian School Lions’ football team is getting some strong praise heading into the 2018 football season.

On Saturday, July 14, the National Athletic Association of Private Schools ranked Briarwood as the No. 6 team in the country just outside of the top 5.

Sitting one spot ahead of the Lions is St. Paul’s Episcopal school, who knocked off Briarwood in the state championship last year thanks to some late heroics to finish with the same 14-1 record as BCS.

To end the 2017 season, both of those teams were also found inside the top 10 with the Lions being ranked eighth to close out the year and St. Paul’s third.

Brentwood Academy (Tenn.) ended the season a perfect 12-0 last year to finish as the NAAPS National Champion just ahead of Bishop Miege (Miss.), who went 13-0.

While it’s a nice recognition for Briarwood heading into the 2018 football season, there is still a lot of work to be done on the field thanks to the loss of several key players, as well as the competition of a difficult region.

The Lions will lose several seniors, including eight that were key to the team’s run to the state championship game last year.

Defensively, Gabe Russell, Patrick Blythe, Carson Donnelly and Andrew Sherrod are all gone. Those four players were what made last year’s team a favorite for the state championship before the season even started thanks to the game experience they had as starters the year before.

Offensively they’ll lose All-County quarterback Michael Hiers and receivers Carson Eddy and Hudson Hartsfield. The Lions will also lose their best offensive lineman in Garrett Bell, who will be headed to Austin Peay.

That loss of production and starting experience for the last two years coupled with a region that features Ramsay, Wenonah, Pleasant Grove, Parker, Fairfield, John Carroll and Woodlawn, will make the path to third straight region championship a difficult one.

With that said, Briarwood is ranked in this preseason poll for a reason. The Lions are the type of team that can handle turnover pretty well because of their depth at each position and back this year will be a solid group on both the defensive and offensive line, as well as at least one returner at every skill position.

Defensively, Linebacker Mark Hand, lineman Dalton Brooks and safety Cade Dickinson are all back, giving Briarwood one solid leader and returner at each position to run their unit.

Offensively, athlete J.R. Tran-Reno, who has established himself as a running back and receiver, will now try to do the same as the team’s quarterback this year.

Offensive lineman Trent Howard will also be back for his junior season as will running back Luke Prewett. Receiver, with the losses of Eddy and Hartsfield, will be the key position to see if somebody can step up to catch the ball this season or whether there will be more running than passing from Prewett and Tran-Reno.

It’s hard to see Briarwood missing out on the playoffs this year, and a region championship is still very much a possibility, but whether this team can compete for a state championship and backup its No. 6 ranking to start the season is something time and their effort throughout the year will tell us.

By SETH HAGAN | For the Reporter HOOVER – The Spain Park football team’s 2017 campaign ended with a first-round... read more