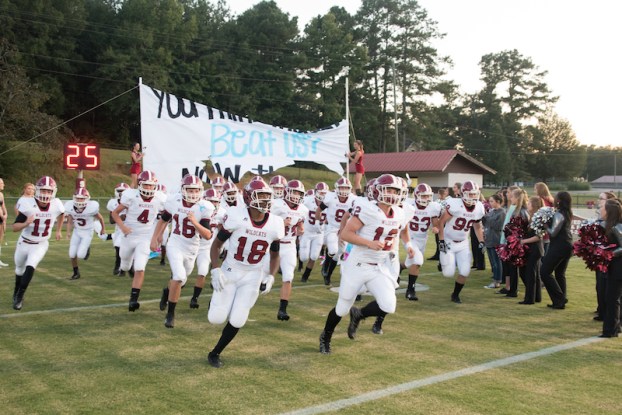 The Shelby County Wildcats changed regions this season, which completely redesigned their schedule for the 2018 football season. (File)

After starting the year 3-2, it looked like the Wildcats may make it back to the playoffs, but what followed was a disappointing five straight losses to end the season, which was capped off with a fight at the end of their season finale against Jemison.

Head coach Heath Childers has referenced that it was an ugly look for the team and it falls on his shoulders.

With their last two losses being by two points or less to Woodlawn and Jemison, the Wildcats had reached their boiling point, but now comes a chance at a fresh slate.

Shelby County will remain in the 5A classification this year, but slides from Region 5 into Region 3, where they’ll compete against Bibb County, Central-Tuscaloosa, Chilton County, Demopolis, Jemison and Marbury.

That’s a big change for the Wildcats, who won’t face any of the same teams in region play, only outside of region play.

The first two weeks of non-region play won’t be a cake walk either with the Wildcats traveling to Childersburg to open the season on Friday, Aug. 24, and then coming back home to host what should be a drastically improved Montevallo team on Aug. 31.

Childersburg finished last season 5-6 and should be average again this season, but Shelby County does hold the advantage of being a classification higher than the Tigers.

Montevallo had a down year in 2017, finishing with a record of 3-7, but the Bulldogs return the majority of their team thanks to young guys being forced into action due to injuries a season ago.

Despite Montevallo moving up from Class 3A into the 4A classification, Shelby County will still have the advantage of being a classification higher for the second week of the season and will be playing a team they were two classifications higher than last year.

Shelby County could very easily go into the third week of the season with a 2-0 record and will have a strong chance to move to 3-0 (1-0) in its first region game of the season on Sept. 7.

The Wildcats will host Chilton County that week, who finished the 2017 season with a 1-9 record. This will be the first time the shoe is on the other foot, however, as the Tigers move down from Class 6A to the 5A classification, which should make this a competitive game.

Shelby County will then hit the road in week four to take part in arguably the Wildcats’ second most difficult game of the season against Bibb County on Sept. 14.

The Choctaws finished the 2017 season with an 11-2 record and a trip to the third round of the playoffs and have also won seven region championships in the last nine years, including three in a row.

The Wildcats will follow that challenging contest with a region contest at home on Sept. 21, against Marbury. Last season the Bulldogs finished 5-6 overall, with one of those wins being a forfeit from Central-Tuscaloosa.

Shelby County will then host a familiar opponent on Sept. 28 when the Wildcats take on former region foe Moody. The Blue Devils finished 4-6 last year, but had one of the best defenses the Wildcats saw.

Last season’s game ended with Shelby County on top 27-21 as the Wildcats look for their second win in a row against the Blue Devils.

On Oct. 5, Shelby County will hit the road one more time before a much-needed bye week when they travel to Demopolis for what will be the toughest game on the schedule this season.

The Tigers ended the 2017 season 11-3 overall, but more impressive, made it all the way to the semifinals of the state playoffs before losing to eventual 5A champion St. Paul’s by one point, 20-19.

Demopolis has made the playoffs every year since 2000 and has won two state championships and nine region titles in that time, including four consecutive region championships heading into 2018.

Coming out of a bye week on Oct. 12, the Wildcats will host region foe Central Tuscaloosa on Oct. 19. It will be difficult to judge after the Falcons had a decent year in 2017, but were forced to forfeit four games due to an ineligible player.

Shelby County should be the favorite, but it could also depend on the morale of Central Tuscaloosa this season, as well as the health of both teams that late in the year. Coming off a bye week should give the Wildcats an advantage.

That will lead into the most telling game of the 2018 season for Shelby County on Oct. 26 as they travel to Jemison to close out region play.

No matter the record for the Wildcats heading into that game, we will then know how much this team has grown since last year’s fight took place between the two teams.

The Wildcats lost that game by a final score of 27-28, but a change in the culture at Shelby County ensued. Jemison went on to finish the season 5-6 with one of those wins being a forfeited win against Central Tuscaloosa.

It could be another toss-up game, but the Wildcats will have a strong chance to close out region play with a win.

The regular season finale will take place on Nov. 2, when Shelby County travels to former region foe St. Clair County. Last season, the Saints beat Shelby County 56-21 and went on to fall to Briarwood 37-33 in the semifinals of the playoffs in an incredible game.

While the outcome of Shelby County’s 2018 season could go a number of different ways, the Wildcats will have as good a chance as any of the last several years to end their eight-year playoff drought.

By ALEC ETHEREDGE | Sports Editor Coming off a disappointing 2017 football season that was plagued by injuries, the Montevallo... read more