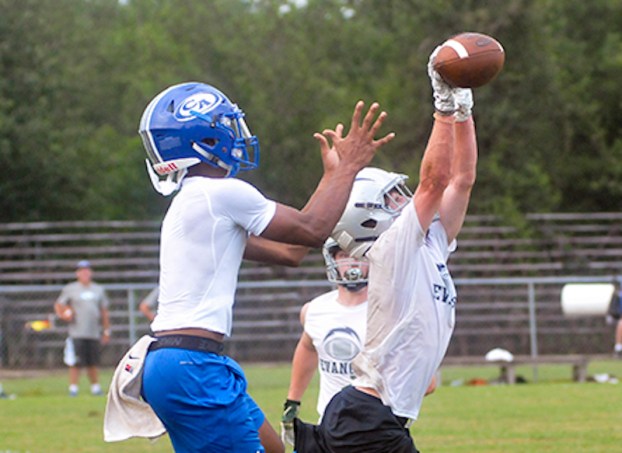 Evangel competed in a 7-on-7 event at Meadowview Christian School on Thursday, July 12, and found a spot in the semifinals of the tournament. (Contributed)

Evangel competes in 7-on-7 event

SELMA – The Evangel Lightning football team traveled to Meadowview Christian School on Thursday, July 12, to compete in a fun 7-on-7 event that featured 10 teams, including other local teams Coosa Valley and Kingwood Christian School.

It marked a good event for Evangel to take part in due to the fact that Meadowview has moved up from eight-man football into the AISA to compete in 11-man football, while Evangel competes in both levels of competition giving them a great feel of what to expect heading into the season.

“The majority of the guys that were here are all guys that I’m pretty good friends with, and they said they’d be glad to do whatever to help build the program and they all agreed to come in,” Meadowview coach Bob Taylor said. “We’ve got eight other schools here other than ourselves. There’s some pretty good teams out here throwing the ball around, and it’s a chance for our kids to learn how to play 11-man and seven-on-seven against three really good teams.

As for the Lightning’s performance at the event, they were able to conclude their five games with a 3-2 record after falling in the semifinals.

“We had a chance to win each game, but just couldn’t pull it off,” said Evangel head coach Tim Smith.

The Lightning were able to beat Lowndes, South Choctaw and Coosa Valley to pick up their three wins at the camp.

One of Evangel’s two losses in the tournament came to a good Pike Academy team by a final score of 8-6 thanks to an interception for touchdown that made the difference.

The rest of the tournament was smooth sailing until the semifinals when Evangel ran into last year’s AISA Class A runner up Chambers Academy. Last year, the Rebels were able to finish the regular season with a perfect record of 10-0 before eventually making it to the state championship game where they lost a tightly contested 22-20 game to Patrician Academy for the title.

Evangel showed it had what it takes to compete with an AISA state championship level team, but ultimately fell by a final score of 14-6 to just miss out on a trip to the camp’s championship game.

Tyler Henderson played quarterback for the Lightning in the event, and according to Smith, he played extremely well. Seth Harrison, Will Ferrell and Cody Jones all three had several catches and scores along with some help from Carter Hand.

On defense, Hunter Green played well, while Harrison, Ferrell and Cody Jones all had interceptions, two of which were returned for touchdowns.