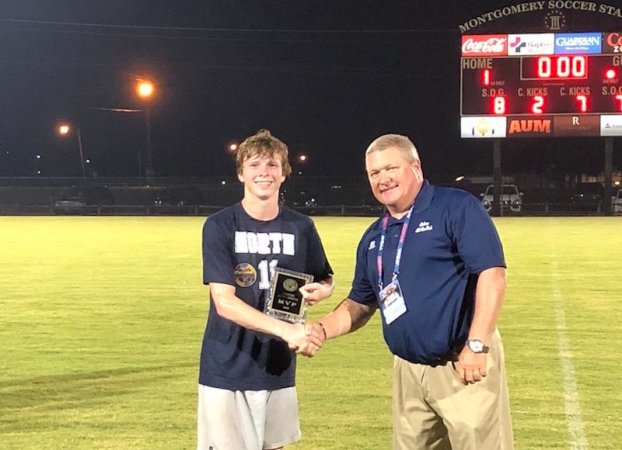 Westminster at Oak Mountain's Price Leonard, above, was named the MVP of the North-South All-Star boys soccer game after scoring the game-winning goal. (Contributed)

MONTGOMERY – With a combined score of 4-1, the North All-Stars swept both the boys and girls North-South All-Star games on Tuesday, July 17, at the Emory Folmar Soccer Complex in Montgomery.

For the girls, Chelsea’s Lexie Duca Scored one of the North’s two goals to put the team up 1-0 within five minutes of the game kicking off. It ended up being the only goal needed for the North goals thanks to a shutout effort from Mountain Brook’s Sarah Adair and Tanner’s Brianna Burroughs.

The North did however score one more goal with just less than 10 minutes less when Madison Academy’s Emery Mills, who assisted on Duca’s goal and took home the MVP honors, put home a goal to give the North a 2-0 shutout victory.

With the victory, Helena girls head coach Clif Naron was able to pick up a win as well after running the show as one of the North’s two head coaches during the game.

The boys’ game was a little more uncertain throughout the contest but featured one of the more exciting All-Star games of the week thanks to two local stars that put home important goals.

Briarwood rising-senior Logan Frost, the 2018 Shelby County Reporter Player of the Year, scored the North’s first goal of the game 14:50 into the contest thanks to an assist from John Carroll’s Jack Bapst.

For the longest time, it looked as if that may be all the scoring in the game after both teams failed to score another goal deep into the second half.

That didn’t last long, however, as the action picked up with 20 minutes remaining in the game.

With 19:53 left in the contest, Spanish Fort’s Joseph Quinn was able to put home the equalizer to tie the game 1-1 and make things interesting.

Less than two months removed from being named MVP of the Class 1A-3A boys state soccer championship, Westminster at Oak Mountain’s Price Leonard was back at it with a big response for the North.

Less than four minutes after Quinn’s equalizer, Leonard was able to flash his brilliance and speed with an unassisted game-winning goal for the North giving he and Frost the team’s only two goals in the game.

Pelham’s Irvin Rodriguez and Oak Mountain’s Cody Wells also competed with Leonard and Frost and helped lead the North, who now leads the series 13-4-1 all time, to the win.