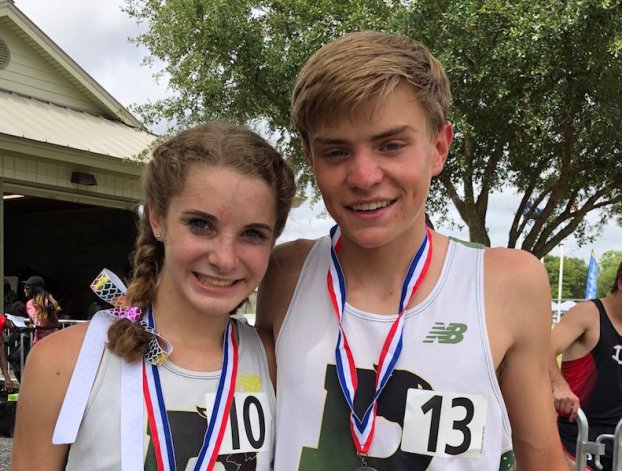 Pelham's Katie Strozier and Adam Keller both competed in the 2018 North-South All-Star Cross Country race in the second year of its existence on Wednesday, July 18. (Contributed)

The only two local athletes competing in the event were Pelham’s Adam Keller for the boys and Katie Strozier for the girls, both for the North All-Star team.

While they didn’t come out on top, they both had strong performances at the event finishing inside the top 10 for their respective teams.

Strozier had the higher finish of the two after taking sixth place with a time of 21:33.90, which was close to two minutes behind the winning pace in the 5K race.

Keller finished in ninth place after posting a solid time of 17:08.01, which was just 40 seconds behind the winning pace set by Hunter Harwell. Keller ended up being the third best finisher on the North team, while Strozier was also the third best North runner on the girls team.

The South girls, coached by Christina Rodgers of Enterprise, nipped the North by one point, 27-28. Tyynismaa also earned South MVP honors with the first-place finish.

The North All-Stars, coached by Brad Hood of Pleasant Valley, were led by Anna Littleton’s second-place finish. The Mountain Brook runner clocked 20:21.50 to earn North MVP honors. Taylor Engram of Auburn was third at 20:45.80 for the South. North runner Abbey Weitenbeck of Huntsville was fourth with a time of 21:02.90.

Enterprise’s Gabriel Hennenberger clocked 16:42.32 to finish second, Silas Franklin of Smiths Station was third at 16:44.38, Myles Stoots of Faith Academy was fourth with a time of 16:46.94 and Charlie Lott of Trinity Presbyterian ran the distance in 16:51.79 to take fifth place for the South. The top 11 finishers Wednesday surpassed the 2017 winning time of 17:27.81 clocked by Hoover’s John McCrackin.

Coaching the South boys was Monica Lott of Trinity Presbyterian and Joshua Gurley of Winfield coached the North. The North won both races last and the South evened the series at 1-1 with this year’s sweep.