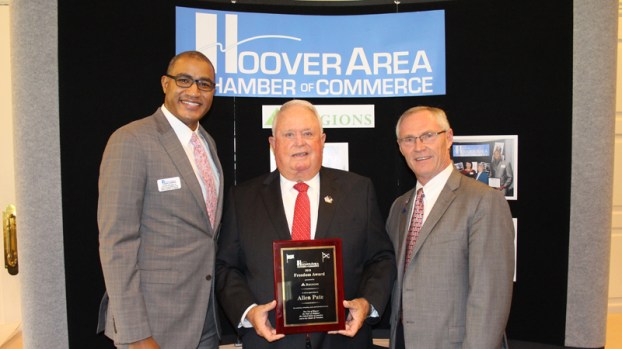 HOOVER – Many Hoover residents are familiar with Allen Pate’s contributions to the city, but fewer probably know about his military service.

Both were praised at the Hoover Area Chamber of Commerce luncheon on Thursday, July 19, as Pate was presented with the annual Freedom Award.

The award, which was started in 2003 with the intention of recognizing Hoover’s most outstanding public servants who have dedicated themselves to the ideals of freedom, was presented by 2016 winner Mark Davis of Vettes 4 Vets.

Other previous recipients in attendance were recognized before Davis talked about Pate’s service, which included 29 years as a city employee when he retired 2016 as executive director.

“If you needed something done in Hoover, or needed an answer to a question, you went to Allen,” Davis said.

Pate, who said he was “honored” to be included among the award’s recipients, served in the United States Navy and served two years in the Vietnam War.

The award recipient is chosen by the Veterans Committee. According to the award guidelines, applicants must:

By NEAL WAGNER / Managing Editor COLUMBIANA – A 45-year-old Alabaster man who has been charged with shooting and killing... read more