CHELSEA –Ronnie Taylor has delivered mail in Chelsea for about five years, but on Saturday, July 14, Taylor delivered something unique to the Chelsea General Store. 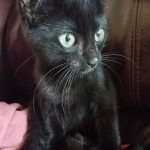 A cat found seemingly near death in Chelsea has been nursed back to health and spends his days at the Chelsea General Store. (CONTRIBUTED)

A kitten Taylor discovered stuck in a drain—malnourished and covered with ants and fleas—has since been nursed back to health with the help of Anna Masters of the Chelsea General Store and other concerned Chelsea residents.

About noon in the vicinity of Chelsea City Hall, Taylor pulled into a parking lot where he usually takes a moment to rearrange the mail in his vehicle.

“When I looked over, his little back legs were stuck in the grate or gutter or whatever,” Taylor said. “It was really hot, and he was just barely meowing. He just looked miserable.”

Taylor, who has been a sub at the Chelsea Post Office for several years before recently being granted a full-time route, noted vultures nearby as he pulled the cat from the drain, got him in the shade and tried to get him to drink some fluids.

Taylor called a local veterinarian, but the business was closed because it was a Saturday. With stops still remaining on his route, he decided the best option was to ask if Masters could watch over the cat at Chelsea General Store until Taylor was done with work.

“They were super helpful,” Taylor said. “I’m glad they were willing to watch him because I didn’t have an idea where he was going to go.”

Masters said the cat’s outlook appeared bleak as he was almost immobile by the time he arrived at the store off U.S. 280.

“He was hot, he was skin and bones, and he was covered in ants and fleas,” she said. “We really didn’t think he was going to make it through the day.”

While at the store, Masters and her daughter, Savannah, tried to get the feline stabilized, bathing him to remove the pests and feeding him.

Masters also contacted a network of people in the area involved with animal rescues, including Kim McCulla with Whiskers and Wags Pet Boutique (and the Shelby County Reporter) and Seavey Webb with Animal Assistance and Rescue Foundation.

After taking the cat home that first evening, Masters posted on social media pages catering to local groups to see if an owner would come forward, but no one did.

A subsequent check-up by Dr. Greg Kelley at Chelsea Animal Hospital revealed that the kitty has no broken bones but a likely spinal injury that prevents use of his back legs.

A steroid shot has not yielded any change to his condition, so he will likely not regain use of the legs, but with care such as he has received, he can expect a comfortable life.

Masters said he has an affectionate and playful personality, and despite his disability can still pull himself around with his front legs.

“He’s such a sweetheart,” Masters said.

Taylor’s residence does not allow animals, so it was agreed upon that Masters and her family would foster the cat until Taylor finds a new home in the coming months that would allow him to take the cat.

In the meantime, the kitty will serve as the unofficial mascot at Chelsea General Store.

“I didn’t do anything that anybody else with a conscience wouldn’t do,” Taylor said. “I’m just glad God had the timing for me to be there and see him.”