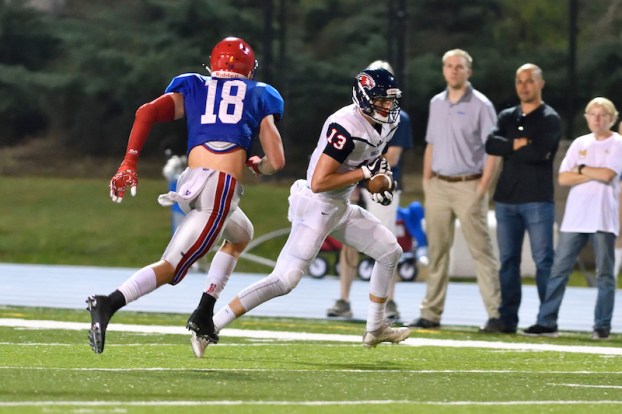 Carson Bobo had a game-high 46 receiving yards at the North-South All-Star football game held at Montgomery’s Cramtom Bowl on Thursday, July 19. He was one of six local players to have an impact in the North’s win. (File)

MONTGOMERY – Now that we are less than a month away from the start of the 2018 high school football season kicking off, it was time to close out the career of six special senior football players from the 2017 season at the North-South All-Star football game held at the Cramton Bowl in Montgomery on Thursday, July 19.

All six had an impact on the game and helped lead the North team to a 27-14 win in the 59th playing of the game.

Offensively, Carson Bobo flashed some of his tight end brilliance to lead the entire game in receiving. Out of all of the All-Stars, Bobo totaled 46 receiving yards on two receptions, which was nine more yards than the next closest receiver, who also had two receptions.

More impressively, Bobo’s two catches both went for more than 20 yards, showing his ability to get open and make a play down the field. His long reception went for 26 yards.

Bobo’s first reception of the game came on third-and-14 midway through the third quarter. Thanks to his downfield ability, the North team was able to pick up a 20-yard gain and a first down to keep the drive alive.

The second of his two receptions came with less than a minute left in the third quarter. On first-and-10 from the 37-yard line, Bobo was able to get open downfield for a 26-yard gain that allowed the North team to get to the 11-yard line with the seconds ticking off the clock in the quarter.

One play later, Quenton Young finished the drive off with an 11-yard touchdown run with two seconds left in the quarter to put the North on top 21-7 heading to the final quarter.

The South was able to get within a touchdown on its first drive of the fourth quarter, but the North’s defense had a couple of big interceptions the rest of the way, and then returned a fumble for a touchdown late in the final minute to ice the game at 27-14.

Helena’s Justin Stuckey also got the opportunity to make a play offensively and caught one ball for five yards. While that doesn’t seem like a lot, the North team threw the ball a total of just eight times, and six of those eight were caught for 103 yards.

The North put more emphasis on running the ball with a total of 234 yards on the ground, while only four players got the opportunity to catch the ball.

Defensively, all three local players made an impact in some way.

Montevallo’s Smith led the three in total tackles with four in the game, including two solo and two assisted tackles. He also added one sack that put the South team back five yards on third-and-7 to force a punt in the third quarter.

Pelham’s Tabb and Shoemaker also represented well in the game on the defensive side of the ball.

Tabb finished just behind Smith with a total of three tackles from his position in the secondary. One of those tackles was a solo tackle, while the other two were assisted.

All three of his tackles came after allowing just a total yardage gain of eight yards. He made a tackle at the end of a 7-yard run, while the other two tackles came right around the line of scrimmage, showing his quickness to the ball.

Shoemaker ended up with just one assisted tackle in the game, but he made an impact on the line as a forceful guy early in the game. His assisted tackle came in the first quarter and led to a loss of four yards for the South team.

McClaren spent time on the offensive line and was a big reason the North team was able to rush for so many yards on the night.

It was a special close to each of those six players’ careers, as they now move on to the next step in life with fond memories of special times over the last several years on the football field.