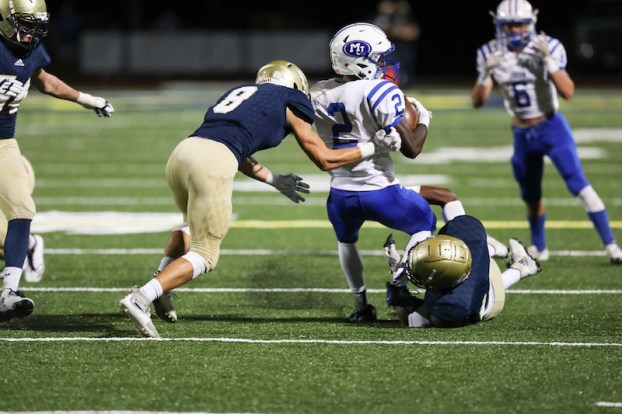 Briarwood's schedule will change during 2018 thanks to the AHSAA reclassification that moved them into Region 4 of the 5A classification. (File)

With new faces, comes new challenges, and the Briarwood Christian School Lions will deal with that in more ways than one during the nearing 2018 football season.

The Lions will not only have some new faces on the team in 2018 with the departure of several stars on both sides of the ball, but they’ll also have a new test when it comes to their 2018 football schedule thanks to the AHSAA’s reclassification.

Last year, Briarwood had one of its most successful seasons in school history after going 14-0, before dropping the state championship game 17-14 to St. Paul’s Episcopal to finish the season 14-1.

While BCS went on to win its second consecutive region championship in 2017 with relative ease, taking down region opponents by an average of 23.4 points per game, they’ll see three new opponents this year that will bring a new challenge to the table.

Last season, the Lions were a part of Region 5 which featured Fairfield, Moody, Pleasant Grove, Shelby County, Wenonah and Woodlawn, with Briarwood’s closest contest being a seven-point win against Pleasant Grove.

This year, BCS slides into Region 4 and will continue to play Fairfield, Pleasant Grove, Wenonah and Woodlawn. New to the Lions’ region, however, will be John Carroll, Parker and Ramsay.

Briarwood will open the season with a jamboree game at Vestavia Hills on Aug. 24, which will give the Lions some preparation on the road before three straight road games to start the regular season.

Their first game counting toward the schedule will take place on Aug. 31, when the Lions travel 9 miles down the road to take on rival Chelsea. BCS holds a 20-9-1 record all time in the series and will look for its second straight victory after downing the Hornets 19-7 last year.

Chelsea, who was down last year, should be improved this season and has won three of the last four games in the rivalry.

That will lead into another difficult game on Sept. 7, when the Lions hit the road yet again for their first region game against Pleasant Grove. Last year, the Spartans gave Briarwood its closest game of the regular season after a 21-14 game.

From their most difficult game to their easiest game a year ago, the Lions will hit the road for the third consecutive week on Sept. 14, when they take on Woodlawn. Briarwood made easy work of this game last year, winning 49-14, and should do so again this season.

Finally, on Sept. 21, the Lions will play in front of a home crowd at Lions Pride Stadium when they host the Wenonah Dragons for the third straight time dating back to the playoffs in 2016.

A rivalry was sparked between the two in 2016 when Briarwood won the regular-season game 15-14, before the Dragons came back to win the playoff matchup 14-8 in the semifinals.

Briarwood got their redemption last year with a 34-0 shutout in the regular season, something Wenonah will have on its mind.

The Lions will then hit the road for two more games, making five of their first six games road contests.

On Sept. 28, Briarwood will travel to Hartselle for a non-region contest, before heading to John Carroll a week later on Oct. 5 for a region game. Those two teams went a combined 9-11 last year, which makes the Lions a favorite to pick up two straight wins, despite Hartselle being a 6A team.

The Lions will then return home for just their second game on their home field on Oct. 12 when they play host to Parker. The Thundering Herd went 3-6 last year, but will have plenty of talent on this year’s squad.

Friday, Oct. 19, is the date to circle on the calendar. That’s when Briarwood will travel to Ramsay for its sixth road contest in eight games and what could be the deciding game for the region championship.

Briarwood head coach Fred Yancey has admitted that they are an extremely talented team.

The Lions will then close the season out with two much-needed home games against Fairfield and Hueytown on Oct. 25, and Nov. 2, respectively.

The matchup against Fairfield will take place on a Thursday night, and will feature a rematch of a game Briarwood won just 23-6 last season. Like Parker, Fairfield will be improved from its 3-7 record a season ago.

Briarwood will close its regular season with Hueytown the following week. The Golden Gophers, a Class 6A team, finished last year with a 5-6 record.

While there will be plenty of new tests for the Lions this season, they should be in contention to bring home their third consecutive region title late in the year.