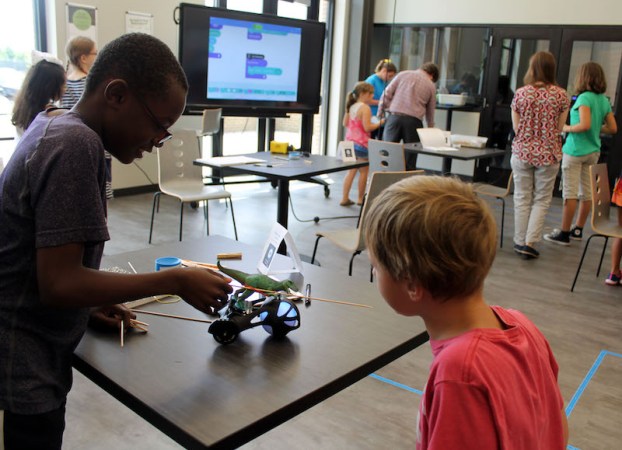 Randall Sims and Xan Powell prepare James the Dinosaur for jousting after writing the code that will propel him. (Contributed)

Pelham Public Library Tech Time programs are for kids ranging from second to sixth grade. Engaging this broad age-range defined by the need to be both intrigued and active is a challenging task.

Pelham Public Children’s Librarian Rebecca Burchfield and Tech Librarian Matt Griffin teamed up to present these programs. Griffin, using the smart board, explained the task. Kids, seated in groups of two to four, were watching and listening with rapt attention. On the students’ tables were spheros—ball-shaped robots—and iPads. Along with the digital tools, the tables also held plastic dinosaurs, lances and chariots. The chariots attached to spheros so that the dinosaurs could ride.

“Today, we’re writing code so that these dinosaurs will joust on this taped course,” Griffin said. “Start by signing into the iPad.”

As Griffin directed the children to choose comparators so that jousting would begin with a sound, Burchfield and other library staffers rotated among the tables answering questions.

Yes, a rising third-grader was intuitively ahead in the programming.

Discovering that spheros produced changeable interior colors, the kids worked to find their own unique hues.
Jousting began. Groups with errors returned to their tables and tweaked their codes.
“We succeeded! We did it! James has finally cooperated,” shouted rising fourth-grader Randall Sims.
He and Powell named their dinosaur James—and James jousted like a champion as the program concluded.

“We’re a great team,” Griffin said after the program, giving a high five to Burchfield.

“We saw interest from younger siblings when Matt did the robotics class with the teens,” Burchfield said. “We worked together using the equipment we had to improvise a lesson that would appeal to our younger set.”

“We want the kids to realize that computer coding must be tested in real-world environments. Code is only successful if it works in the real world—and that requires trial and error,” Griffin said.

By PHOEBE ROBINSON / Special to the Reporter COLUMBIANA – Makalyn Heaslett was crowned Miss Shelby County at the 31st... read more