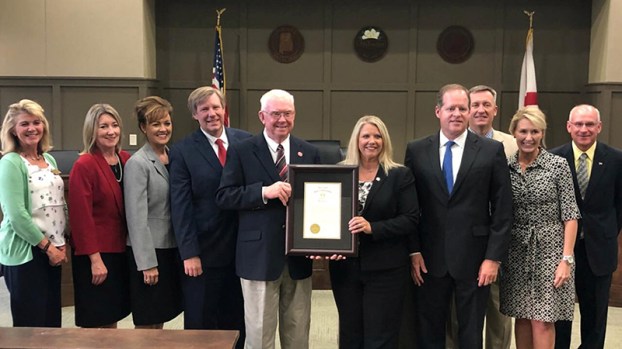 This resolution honored and commended Seales for his outstanding accomplishments, service and achievements in his untiring efforts to preserve the history of Alabama, Shelby County and local areas.

After his retirement as president of the Shelby County Historical Society and as Director of the Shelby County Museum and Archives, the city of Alabaster authorized Seales to publish a pictorial history book on Alabaster entitled “Alabaster and Siluria: The Early Years – A Pictorial History.” The book was published in 2017 in recognition of the Alabama Bicentennial and is in the general collection at the Library of Congress.

Seales’ main goal is to bring Shelby County and Alabama’s history to life and encourage people to enjoy, appreciate and preserve their rich history. He recently started his second book “Pelham Memories: A Pictorial History.” Not only will this book be important for the people of Pelham but the entire county because Pelham was originally called Shelbyville and was the original Shelby County seat. The Pelham book coincides with the 200th Anniversary of Shelby County which was on February 7, 2018.

Visit the website http://algw.org/shelby to find out how to acquire either book.