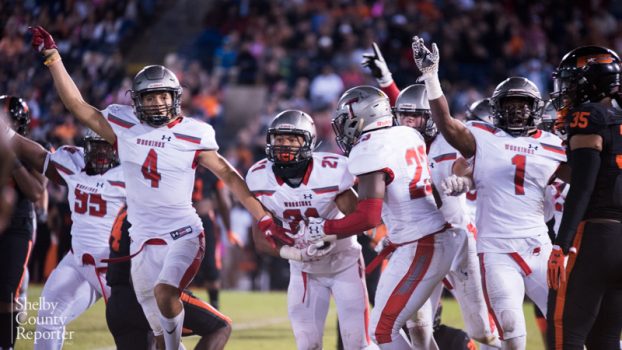 The Thompson Warriors' home game against the Hewitt-Trussville Huskies will be televised on ESPN2. (File)

It’s becoming a common theme for three teams in Class 7A, Region 3 to be ranked in national preseason polls and on Sunday, July 22, popular high school sports website MaxPreps released its top 100 teams for the preseason, featuring Hewitt-Trussville, Hoover and the Thompson Warriors.

Just more than a week ago, the Warriors were ranked 54th in the country in the Prepsnet.com preseason rankings, but sat behind both Hoover (sixth) and Hewitt (28th).

This time around, Thompson was still ranked behind Buccaneers in 21st, but the Warriors, ranked 40th, were one spot ahead of the Huskies in 41st.

All three of those teams will have an offense run by a future Division I quarterback thanks to Alabama commits Taulia Tagovailoa (Thompson) and Paul Tyson (Hewitt) running the show for their respective schools, while Hoover’s Robby Ashford, just a junior, has offers from Auburn, Florida and Georgia.

Thompson is the only one of those three teams, however, looking to defend its region championship from 2017, which marked the first region title for the Warriors since 1997.

That has surely put a target on their backs, especially from Hoover, who had won four of the last five region championships and hadn’t lost to THS in school history.

Knowing that target has been placed squarely on them, Thompson should have all of the motivation it needs going into this season, but some question marks still surround the team.

Offensively, receivers Ahmad and Mo Edwards have both graduated. Ahmad set a state record for receptions with 118, while totaling 1,464 yards and 13 touchdowns. Mo ended the year with 1,074 yards and 11 touchdowns on just 58 receptions, which was good enough for an average of 18.5 yards per catch.

Defensively, Thompson’s top four playmakers are all gone. Linebackers Jalen Rayam and K.J. Robertson, who combined for 269 total tackles, 40 tackles for loss and 11.5 sacks, leave a gap that will be close to impossible to fill this year.

In the secondary, Myles Brown is gone after tying for the team lead in interceptions with four and totaling 96 tackles. On the line, Mackie McNeal is gone after totaling 87 tackles last season.

They will get a lot of guys back who had experience last year, led by Will Conner at linebacker and Jalen Bustamante at safety. Those guys and many more will have to step up in order to make this team as good as last years.

For what 7-on-7 is worth, the Warriors have handled business this summer with two championship finishes and one second-place finish in three events so far. Several of those wins have come against Hewitt and Hoover.

Thompson will kick the season off on Aug. 24 in Montgomery against James Clemens, and the Warriors’ first home game won’t be until Sept. 14 against Oak Mountain.