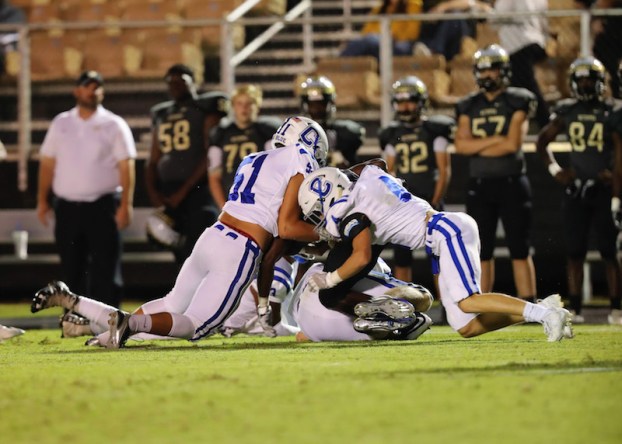 Chelsea will take on several new opponents this year thanks to moving regions in Class 6A. (File)

While Chelsea will keep its familiar county rivals in Helena and Pelham on the schedule in 2018, the rest of the Hornets’ region will be a much different story under first-year head coach Dustin Goodwin.

It’s part of a reshuffle that saw Chelsea, Helena and Pelham move from Class 6A, Region 3, into Region 5.

The positive is that teams like Benjamin Russell, Opelika and Wetumpka will no longer be on Chelsea’s region schedule. Instead, the Hornets will add Carver-Birmingham, Homewood and Jackson-Olin to their schedule.

While all of those teams are a threat, it gives a much more competitive and wide open region for those seven teams to battle for one of the four playoff spots out of the region.

Chelsea’s 2018 schedule, however, will be a tough test thanks not only to the team’s region trek, but adding non-region games with Oak Mountain, Briarwood, Calera and Pell City.

The first of those four games will be played on Aug. 24, when the Hornets open the season with a road contest against county foe Oak Mountain.

Chelsea has started the last two seasons with a matchup against the Eagles, splitting the two games. The Hornets took the game 49-33 in 2016, while Oak Mountain bounced back with a 21-10 win last year. It should be another tightly contested game this year.

The Hornets will then head home a week later on Aug. 31 for their first home contest of the season against another county foe in Briarwood. What has been a rivalry for the two teams over the years, always creates for a great meeting.

Briarwood leads the all-time series 20-9-1, but the Hornets have won three of the last four. The Lions won 19-7 last year, and should be a favorite again this year, but it should be a tossup.

Chelsea will then hit the road again on Sept. 7 for its first region game of the season against the Carver Rams. The Rams are coming off a solid 7-4 season that saw their season end in the first round of the playoffs.

They did, however, compete in an easier region a year ago, which should create for a tight game.

The Hornets will play their second road game in a row on Sept. 14, when they travel to Jackson-Olin for another region game. The Mustangs started last season 5-1, before losing three of their final four games to finish 6-4.

Jackson-Olin can be a tossup team each year, but it’s another game Chelsea should be in and have the chance to win.

On Sept. 14, the Hornets will head back home for their third consecutive region game against a familiar county foe, the Pelham Panthers.

Pelham looks to be one of the favorites to win the region title this year and beat Chelsea 36-23 last year to help clinch a playoff berth.

While that will be a tough test, if the Hornets can get through those first three games with a 2-1 record heading into a bye week on Sept. 21, they will be in great shape heading into the second half of the schedule.

Coming out of the bye week, Chelsea will take on another county rival at home when they play host to the Helena Huskies on Thursday, Oct. 4.

Last season, the Hornets beat Helena 24-17 to win their second game in a row after an 0-7 start, which gave them confidence heading into the offseason.

That game will be followed by a road trip to Homewood, who like Pelham is one of the favorites to win the region title this season. It will be the first-ever meeting between the Hornets and Patriots.

Homewood was ranked all of last year after starting the season 9-0, before a difficult 13-7 loss to Paul Bryant during the final week of the regular season.  They went on to lose 30-0 to Clay-Chalkville in the second round of the playoffs.

Chelsea will return home on Oct. 19 for its final region game of the season against Minor. The Tigers are two years removed from an 11-2 season, but went just 4-6 a season ago.

The Hornets will then finish the regular season off with non-region games at Calera on Oct. 26, and at home against Pell City on Nov. 2.

Chelsea has a realistic shot at going 4-2 in region play if they stay healthy, which would give them two weeks at the end of the regular season to get ready for the playoffs.