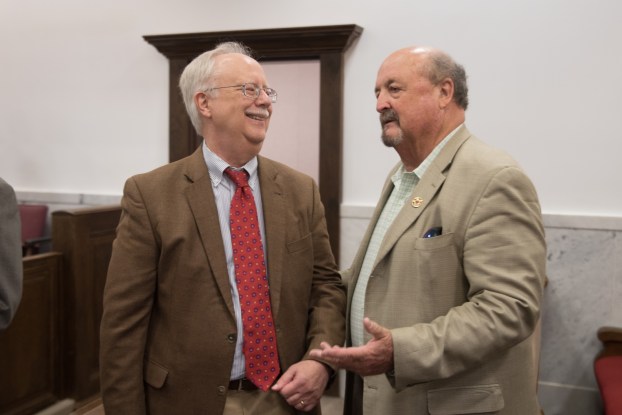 Judge Jim Fuhrmeister bids farewell to friends and colleagues during a retirement reception held in his honor. (Reporter photo/Keith McCoy)

COLUMBIANA – A host of county and state leaders gathered at the Shelby County Courthouse on Friday, July 20, to bid farewell to Shelby County Probate Judge Jim Fuhrmeister who is set to retire at the end of his term in January 2019.

Fuhrmeister was appointed to the seat by Gov. Bob Riley in February 2008 following the death of his wife, Patricia Fuhrmeister.

Fuhrmeister plans to spend his retired years living in Fairhope and traveling the world. He’s already planned a month-long trip to Ireland this fall.

One family in particular wanted to make sure Fuhrmeister knew the impact he’s had on their lives.

Irene and Marty Hayes are the parents of 14 children, 10 of which are adopted. Fuhrmeister finalized the adoption of nine of the couple’s children. Allison Boyd, who was recently elected to replace Fuhrmeister after he retires, finalized one of their adoptions.

Irene, Marty and six of their children attended the retirement reception to thank Fuhrmeister one last time.

“He is the most humble and compassionate man,” Irene Hayes said. “You walk into the courtroom nervous and not really knowing what to expect, but there he sits wearing a red clown nose and he immediately puts everyone at ease.

“He tells them that being adopted makes them a part of a special club and it’s neat because he’s adopted, too. He’s just so personable and he makes it so much fun.”

But Irene Hayes said the relationship she and her kids have formed with Fuhrmeister probably isn’t much different from other families.

“He has a way of making everyone feel a special bond with him,” she said. “He has that gift.”

“But we do feel that Allison Boyd has the same compassion that he does and will be a great fit,” Marty Hayes added.

At the reception, Boyd praised Fuhrmeister for being a wonderful mentor and a loving person.

“He has all the qualities you’d want to see in a judge,” she said. “Shelby County has been fortunate to have him for as many years as we have. He’s left a wonderful legacy that I hope to continue.”

“Allison and I have known each other for five to six years and have worked together in the Probate Office for the last two and a half years,” he said. “I think she’s going to do a great job and I’m excited for the future of Shelby County.”

Fuhrmeister was appointed to the seat by Gov. Bob Riley in February 2008 following the death of his wife, Patricia Fuhrmeister.

During his time as probate judge, he established the county’s first mental health court also conserved taxpayer funds by reducing the size of the Probate Office. He’s also made several technological advancements in the land records department and instilled a more efficient comprehensive case management system.

Fuhrmeister said he’s excited for the future and plans to spend his retired years living in Fairhope and traveling the world. He’s already planned a month-long trip to Ireland this fall.

As the Hayes family prepared to leave the reception, all of the children embraced Fuhrmeister one last time and promised to keep in touch.

“If I have a legacy, this is my legacy,” Fuhrmeister said while hugging the family.

Was an animal seen in Veterans Park Lake an alligator?

HOOVER – A possible young alligator reported at Veterans Park Lake off Valleydale Road was determined to actually be a... read more