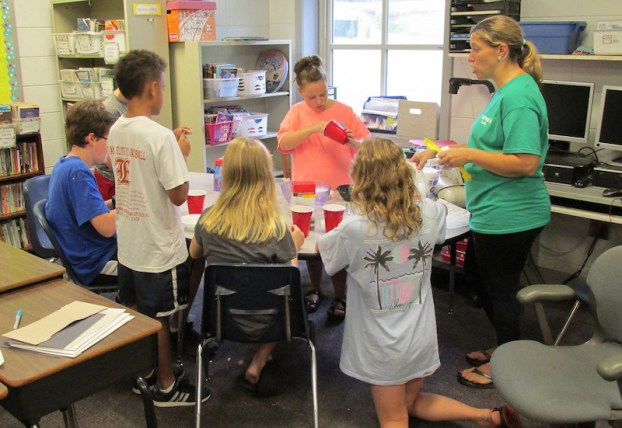 Campers at the “Full Steam Ahead Camp” participate in an activity the week of July 16 at Helena Intermediate School. (For the Reporter/Michael J. Brooks)

By MICHAEL J. BROOKS / For the Reporter

“We’ve had a lot of fun together,” Sarah Hopper, the camp teacher and fifth-grade teacher at Helena Intermediate, said. “We try to offer a variety of fun activities that enhance learning.”

The camp was sponsored by the Shelby County Schools Community Education.

One camper, Hannah, a rising fifth-grader, said her family recently moved from Pittsburgh, Pennsylvania and her mom found the camp listed in the Helena Happenings section of the City of Helena webpage.

“I like the camp,” Hannah said. “We’ve done a lot of fun things and I’ve made some new friends here.”

Campers in Ms. Hopper’s room rotated among several activities including Lego construction, Chromebook learning games and the “bouncy ball” group. Hopper said the bouncy ball group used the same ingredients that would be used later in the week to make slime.

“The bouncy ball mix is like slime, but it’s overactive,” Hopper said with a laugh.

Another camper, Caroline, described the slime/ball mix as “really weird but fun to make and to put your hands in!”

Julie Summerall, also a fifth-grade teacher at Helena Intermediate, superintended a second group at the camp. On Tuesday, her children made “creatures” from UV beads and pipe cleaners. The beads are clear but turn different colors in sunlight as the boys and girls discovered when they went outside.

“We try to mix science and engineering,” Summerall said. “In the previous camp in June we had robots, too.”

According to the Community Education website eight locations throughout the county hosted camps this summer.

“We try to make learning fun in the summertime,” Summerall said.