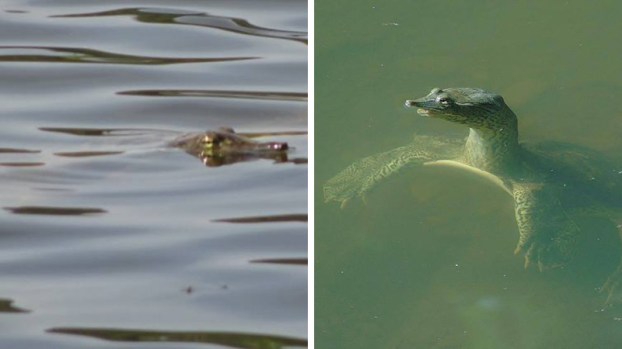 A photograph of a possible young alligator, left, taken by a resident at Veterans Park was determined to be a soft shell turtle, an example of which is shown at right. (CONTRIBUTED)

Was an animal seen in Veterans Park Lake an alligator?

HOOVER – A possible young alligator reported at Veterans Park Lake off Valleydale Road was determined to actually be a type of turtle.

A resident visiting the park on Friday, July 20, snapped a photograph of the animal swimming in the lake and reported it as a possible alligator, which surely would have raised fears among the many others who frequent the park.

“Animal Control has been working closely with a local expert at the lake, trying to search for any clues that an alligator might be there,” Hoover Police Department Officer Brian Hale said. “They were unable to find any signs that an alligator was in the area. We also received multiple opinions from experts and specialists from across the region who concluded the animal in the picture is indeed not an alligator. The unanimous opinion from these experts was that the animal in the photo is a species of soft shelled turtle.”

There have been no other reports filed with HPD, whether recently or since the park’s establishment, of an alligator or similar animal in the lake, Hale said.

“We still urge caution around any body of water,” read a post on the HPD Facebook page. “Always remain vigilant and alert to any potential dangers associated with nature, wildlife and bodies of water. If you see anything suspicious, please do not hesitate to contact us: 911 for emergencies and (205) 822-5300 for non-emergencies.

“Animal Control will continue to monitor this situation and we will update if necessary.”