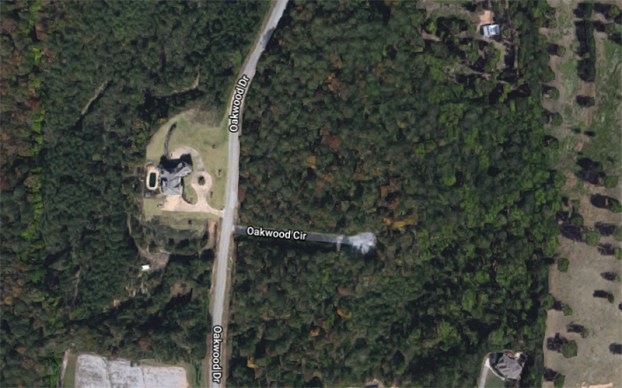 A developer is looking to build five estate-sized homes off the east side of Oakwood Drive near what is currently Oakwood Circle. The unused Oakwood Circle road would be removed if the development moves forward. (Contributed)

ALABASTER – Those who want to share their opinions on a plan to bring a handful of new homes to Alabaster’s Oakwood subdivision will have a chance to do so during an upcoming public hearing on the matter.

The hearing will come about two months after the city’s Planning and Zoning Commission voted to recommend the council rezone about 14.4 acres in the Oakwood subdivision to allow for a new five-home estate development off Oakwood Drive, passing the decision along to the council for final consideration.

After the Aug. 27 public hearing, the council likely will vote on the matter the same night.

The property currently is zoned as municipal reserve, which was attached to the property when the city annexed it along with much of the land surrounding Saddle Lake Farms in 2015, and the developer is seeking estate zoning, which would allow for no more than one home per acre.

A developer is looking to construct five estate-sized homes on the property, which is between Massey Road and Oakwood Lane in eastern Alabaster.

Plans submitted to the city call for four 3-acre lots in the development and one 1.7-acre lot. Two pair of new homes will share a common driveway, while one will have its own driveway. Before the project can move forward, the city must approve a subdivision plat, and the county must sign off on the shared driveways.

Planning and Zoning Commission members said the five estate-sized homes will match what is currently in the area, and said all necessary utilities except city sewer are available in the area.

From Staff Reports In celebration of the state of Alabama’s 200th anniversary, University of Montevallo Professor of Music Joseph Landers... read more