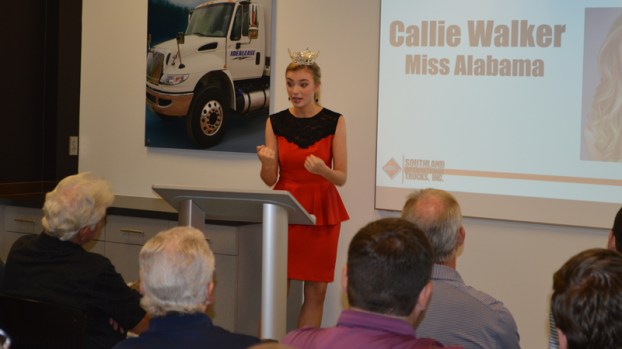 HOMEWOOD—A three-year journey to being crowned Miss Alabama was no easy feat—it took determination, persistence and motivation. This story of tenacity is one Oak Mountain High School graduate Callie Walker shared with the staff of Southland International Trucks in Homewood July 11.

“Persistence,” Walker said. “You just have to keep pushing forward no matter what.”

Winning Miss Alabama’s Outstanding Teen Pageant in 2012, Walker was one of the youngest girls to be crowned.

When she participated in the Miss Alabama pageant for the first time, she said she wasn’t heartbroken when she was named first runner-up. According to Walker, she just wasn’t ready.

The next year, though, Walker wanted the title.

“Rather than wanting to serve as Miss Alabama for the state of Alabama, I wanted to win the competition,” Walker said. “That mentality, looking back this past year, was wrong. It wasn’t the right mindset.”

After feeling like she’d done everything she could have to prepare, Walker was named first runner-up again. After leaving the competition, Walker said she didn’t want to compete again, thinking it wasn’t mean to be.

Ultimately, Walker decided to compete one last time despite having an additional five years of eligibility to participate. This time when practicing, she took a new approach.

According to Walker, there was a calmness to her this year. She said she felt ready for any question the judges could ask her during the interview portion, and she’d perfected her talent. For her, the week of Miss Alabama was enjoyable.

“At the end of the week, we got to the top five again, and they called out my name this time,” Walker said. “It was very special—a really rewarding moment—and it showed all the hard work and preparation does pay off.”