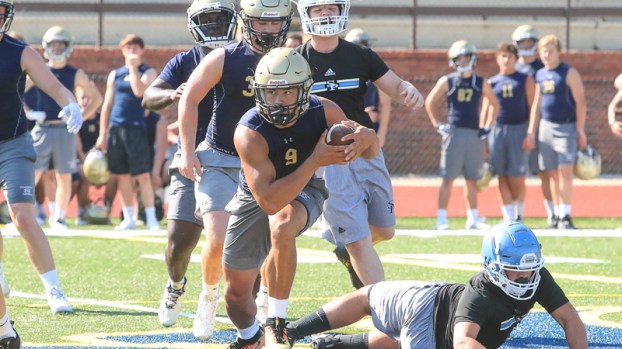 Briarwood’s J.R. Tran-Reno competes in a scrimmage against Spain Park on Wednesday, July 25. (FOR THE REPORTER/DAWN HARRISON)

Scrimmage helps prepare for start of the season

NORTH SHELBY – Shawn Raney and Fred Yancey do not put much stock into the football that was played during an inter-squad scrimmage on Wednesday, July 25, but there were important lessons to be learned.

No score was kept during the game at Briarwood High School. Players wore helmets but no other pads, and tackling was replaced by touching a ballcarrier or the blow of the whistle from the coaches.

Still, the coaches said such exercises can be beneficial with the start of fall practice, then the season, looming.

“We come out here wanting to see if we have improved any since the spring,” said Yancey, who is entering his 29th year as coach at Briarwood. “We’re looking for alignment and assignment and technique.

“It was good for us because Spain Park is so organized and such a good team.”

The teams played their starters for the first half of the scrimmage and then substitutes and younger players in the second half.

Raney’s Spain Park team plays in Week 0, so it will not have the benefit of an exhibition game before the start of its season, instead relying in part on the scrimmage against Briarwood to work out the kinks.

“We did this last year and thought it really helped,” said Raney, coach of the Spain Park Jaguars.

Raney said he looks for proper “sideline management,” such as calling in plays, substitutions and lining up in special teams packages.

And with no tackling, some parts of the game are difficult to replicate.

“It’s so hard to simulate the running game in shorts,” Raney said.

“In these types of situations, you can’t become a great football player, but you can do what we ask,” Yancey added.

Raney said the Jaguars have worked hard to improve during the summer program, and results started to show during an impressive performance at a 7-on-7 competition at Hoover High School.

“I think this team has come together as a team,” Raney said. “I don’t put stock into these kinds of things, but I do put stock into how you respond to situations, and we’ve done a good job with that.”

Both teams will begin fall practice on Aug. 6

Spain Park’s first game is Aug. 24 against Hillcrest-Tuscaloosa at home, while Briarwood’s campaign starts Aug. 31 with a visit to Chelsea.

By ALEC ETHEREDGE | Sports Editor While Chelsea will keep its familiar county rivals in Helena and Pelham on the... read more