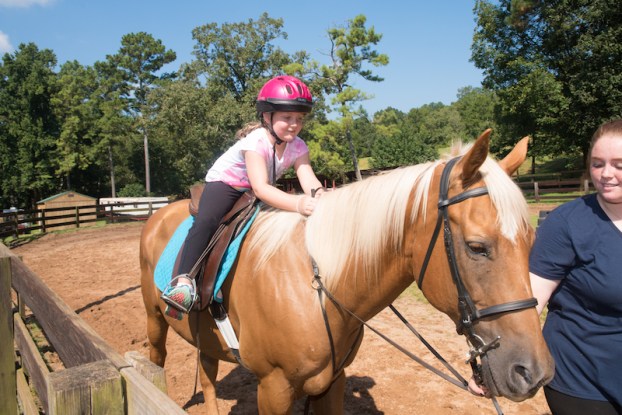 Vivian Gilbert learns to ride one of the horses at a summer camp on Wednesday, July 25, at Rocking S Farm in Helena. (Reporter Photo/Keith McCoy)

HELENA–Anxiousness and fear quickly turned into fun and laughter as several campers who have never ridden a horse learned the proper technique at a summer day camp at Rocking S Farm in Helena on Wednesday, July 25.

Ten kids arrived at the farm that morning with the majority having little or no experience of horseback riding.

However, this is where Rocking S Farm owner Suzanne Schnetzler and her camp leaders step in to provide individual instruction, lessons and safety tips at the summer camp before anyone climbs a top one of the 23 horses located on the farm.

In addition to riding lessons, campers learned how to groom and tack the horses, played games and painted the horses for a full day of fun as summer winds down.

Third grader Vivian Gilbert was one of those who attended the camp for the first time and admitted she was nervous at first.

“My favorite thing about the camp was riding the horses,” Gilbert said. “Today was my first time riding and I was a little scared at first but I did well. I also really liked painting the horses. At first, I thought we would be painting on a piece of paper but it was really fun painting on the horses.”

Schnetzler has owned Rocking S Farm since 2005 and since that time, she has trained numerous riders and offered camps for a wide range of people, including those with and without experience.

For Schnetzler, animals are her love but the one thing she enjoys above all is seeing the smiles the horses put on children’s faces.

“I think my favorite thing is just seeing the smiles and seeing how nervous they are at first,” Schnetzler said. “Then they get over being shy and by the end, they’re smiling and laughing.”

In between riding lessons, students also learned to do barn chores and got a taste of what a typical day is like at Rocking S Farm.

Summer is one of the busier times at Rocking S Farm but Schnetzler said riding lessons are offered year-round. The farm typically offers camps when school is out during the school year as well.

The farm is located at 4141 Shelby County 93 North. For more information on Rocking S Farm in Helena, visit Facebook.com/rockingsfarm/.

FROM STAFF REPORTS The Albert L. Scott Library in Alabaster is the recipient of the 2018 Virginia Hamilton and Arnold... read more