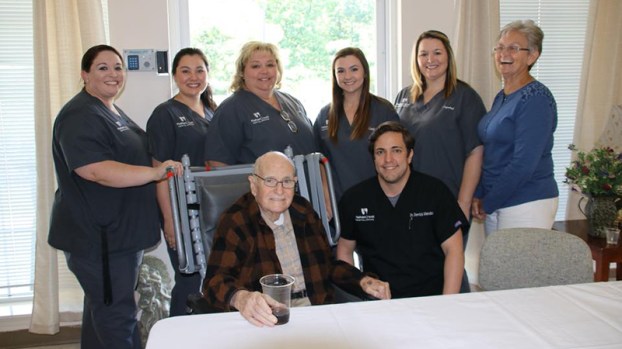 By Nancy Wilstach / Community columnist
A man who touched many lives, saved many teeth, rescued many pieces of history and doused many fires died Tuesday night.
Just because S.M. “Mike” Mahan, known as “Doc,” has died at 84 does not mean his influence died with him.
He leaves behind—in addition to family and a host of friends—thousands of memories of a dentist who was a master of the string bass, of an historian who could organize a fire department, and of a fully uniformed Civil War re-enactor who might show up at a wedding to fire a fully functioning cannon.
Kindness, enthusiasm and the love of a good story (and a good party) will accompany him on his final journey.  Following a wake Friday night, Doc rides on a Brierfield Fire Department truck from his home of Montebrier to Montevallo United Methodist Church for Saturday’s funeral.  Then, the Montevallo Fire Department’s “Little Red” carries Doc on his last visit to Montebrier for a reception before his burial in the Brierfield Cemetery.
That Friday night all-male gathering is billed as “Have a Drink with Doc,” said long-time friend and protege Marty Everse.
“Firemen will stand guard around him all night,” said daughter Stann Mahan Maraman.
Doc was only the second Montevallo fire chief.  His father “Red” Mahan was the first.
A patient once complained that she had been left sitting in the dental chair, mouth propped open and numbed, when the fire chief rushed off to respond to a house fire. Doc’s reply was: “What if it had been your house?”
He was always on duty—in the dental office or at the fire station, on the bandstand or deep into a historical project.
“One of Mike’s many obsessions in life was history,” Everse said. “The Brierfield (Ironworks) Park exists today as a monument to his dogged determination to preserve that slice of Alabama’s heritage.  Montebrier, his home for 50 years, is another example of his love of history.
“And he didn’t limit his affections to just Brierfield and Montevallo.  As a member of the Alabama Historical Commission, he dashed across the entire state whipping up enthusiasm for saving old buildings and sites.”
When Brittany Farrington, 33, was a little girl, Doc gave her a wonderful memory.  “I had fallen down and broke off a baby tooth,” she said, “so I ran down to his house.  After he pulled the tooth, he told me that, I had been such a good girl, so he took me out to the barn and gave me my first ride on a horse. He took care of my teeth until he quit doing dentistry.”
The Farrington family was close to the Mahans with several members working on the farm, and Brittany’s mother, Evelyn, working at the Mahan Creek Dental Office. When Brittany’s uncle, Sgt. Robert Farrington, died in the 1996 airplane crash that also killed U.S. Commerce Secretary Ron Brown, Doc Mahan led the effort to name the Main Street bridge beside City Hall for Farrington.
Mahan and his wife, Linda Chambers Mahan, lived in Montebrier on the banks of Mahan Creek where they reared their daughters: Miki Mahan Heaton (Hud) and Stann Mahan Maraman (Neal). Three grandsons and a great-granddaughter also frolicked in the waters of Mahan Creek and roamed the woods and pastures.
He graduated from Auburn University, University of Montevallo and UAB School of Dentistry. It while playing in the symphony orchestra in Columbus, Ga., that Mahan met his wife, a violinist.
Compassion ran deep with Doc. Besides serving as a volunteer fire chief, he devoted part of his dental practice to Dentistry from the Heart, special days when those who needed dental care but could not afford it were treated for free.
That community concern lives on through DMD (Doc’s Magnanimous Dentistry), a fund set up to continue the legacy of Dentistry from the Heart.
Donations can go to DMD through GoFundMe.com (search for Doc’s Magnanimous Dentistry), or checks can be made out to DMD and mailed to Miki Mahan Heaton, 971 Blowing Cave Road, Gurley, AL 35748.
Services will be at 9:45 a.m. Saturday at Montevallo First United Methodist Church, 861 Middle Street, Montevallo, with a light lunch afterward at Montebrier, 19275 Alabama 139, Brierfield. A private burial will follow the luncheon.

National Night Out set for Aug. 7

By GRAHAM BROOKS / Staff Writer HELENA–A great opportunity for a meet and greet with the first responders who help... read more