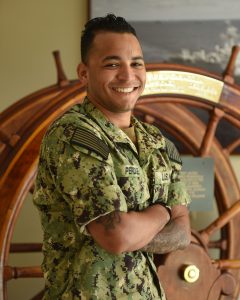 Perdue credits people in his hometown who have served for inspiring him to join the Navy.

“I knew people in my community who have served in the Navy,” said Perdue. “The stories I heard made me think about serving as an option.”

NAS Pensacola, “The Cradle of Naval Aviation” is best known as the initial primary training base for all U.S. Navy, Marine Corps and Coast Guard officers pursuing designations as Naval Aviators and Naval Flight Officers.

It takes a lot of manpower to support and train pilots, but there is much more to this base that employs 16,000 military and 7,400 civilians. This includes major tenant commands: Naval Aviation Schools Command, Naval Air Technical Training Center, Marine Aviation Training Support Group 21 and 23, the Blue Angels, and the headquarters for Naval Education Training Command (NETC), a command which combines direction and control of all Navy education and training.

As the premier naval installation in the Department of the Navy (DoN) NAS Pensacola provides base and operational support functions such as quality of life, administration, logistics, facilities, comptroller, management administration and operations (airfield, port, security, fire and search and rescue).

“I’m so proud of the entire team throughout our aviation enterprise,” said Capt. Christopher T. Martin, Commander Naval Air Station Pensacola.“The future of NAS Pensacola is bright, and we’re only going to continue to adapt and evolve as we prepare to efficiently deliver the very best readiness from the shore.”

“As sailors forged by the sea, we will continue to be the Navy the Nation Needs. One of the Chief of Naval Operation’s Lines of Effort is what we do best, strengthening our Navy team for the future,” said Martin.

Perdue has military ties with family members who have previously served and is honored to carry on the family tradition.

“My stepfather served in Navy as a damage controlman,” said Perdue. “He was proud to see me join.”

Pensacola stands up to the expectations and provides a perfect environment for the workers and their families. The citizens benefit from all the modern world advantages, from schools and hospitals to recreational areas, theaters, cinemas and multiple services.

As a member of one of the U.S. Navy’s most relied-upon assets, Perdue and other sailors know they are part of a legacy that will last beyond their lifetimes providing the Navy the nation needs.

“The Navy has brought me opportunities to do something and make a difference,” Perdue added. “I enjoy wearing the uniform. You feel like you are a part of something bigger than yourself.”