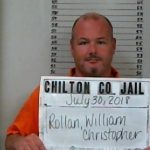 According to court documents, Rollan was allegedly in possession of 2.2 grams of methamphetamine on July 23 near the 1500 block of Chilton County 131 in Jemison where he “unlawfully possessed the controlled substance.”

In addition, Rollan allegedly committed the crime of receiving stolen property in the second degree on July 23 “between $1,500 and $2,500 in value for a black 16-foot flatbed trailer.”

Rollan, who lists an address in the 2000 block of Shelby County 58 in Helena, was transported to the Shelby County Jail where he was being held on a $10,000 bond until his release on July 30. Rollan was a former employee of the Helena Police Department a few years prior.

According to arrest warrants, the incident took place between July 20-21 where Rollan and Helminiak allegedly “Knowingly obtained or exerted unauthorized control over the property of a 16-foot homemade trailer valued between $1,500 and $2,500 belonging to another individual.”

Rollan was released from the Chilton County Jail on July 30 on bonds totaling $7,500.

Receiving stolen property in the second degree is a Class C felony and carries a maximum sentence of 10 years in prison upon conviction, according to Alabama law.

Possession of a controlled substance is a Class D felony and carries a maximum sentence of five years in prison upon conviction, according to Alabama law.

National Night Out set for Aug. 7

By GRAHAM BROOKS / Staff Writer HELENA–A great opportunity for a meet and greet with the first responders who help... read more