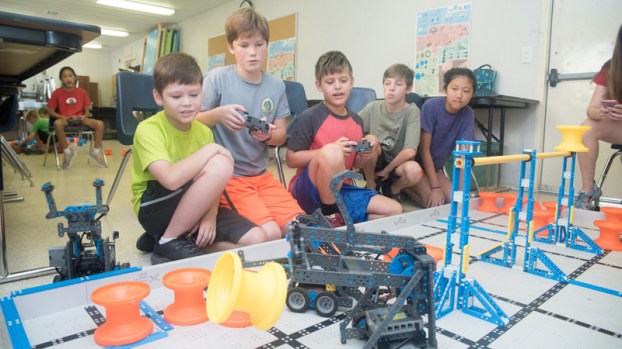 Students in the robotics camp at Oak Mountain Intermediate School the week of June 25 control their robot through a course. (REPORTER PHOTO/KEITH MCCOY)

NORTH SHELBY – Robotics has attracted such popularity in Oak Mountain schools that some students continue to study over the summer.

Entering her seventh year at OMIS and with the robotics program, Furman said only one student was involved that first year.

“It has grown from there,” Furman said.

The program has grown so significantly, in fact, that another teacher, Karen McDonald, came aboard last year as 40 students were involved.

Furman focuses on construction and competition while McDonald handles programming and research.

The founding of a robotics program for gifted third grade students necessitated opening up to fourth graders the OMIS program, which previously served only fourth graders.

“It didn’t make sense for us to skip fourth grade at the intermediate school, so we expanded,” Furman said.

Nine students entering fourth through sixth grades participated in the camp, which was held for the third time.

Most of the participants are members of the robotics team, but not all.

“Some people will have conflicts during the school year and they can’t be there on Thursdays when we meet,” Furman said. “We had some (at the camp) that had no robotics experience and others that had gone through a whole season and wanted a jump start on the next competition season.”

So, activities ranged from building robots from explicit directions to building much more customized robots that can carry out tasks required at competitions—and then a mock tournament for those bots.

Oak Mountain’s high school VEX IQ robotics team won the state championship in spring 2017, and the middle school team under the guidance of Sherry Whitehead is a regular at such competitions, including the VEX World Championship, where the top international teams compete.

“She’s kind of a mentor for all of us in the Oak Mountain VEX program,” Furman said about Whitehead, who was named VEX IQ Teacher of the Year at the 2016 World Championship.

VEX IQ has “exploded” over the past several years on a national level, Furman said, and the success of the programs at Oak Mountain schools is an example of that growth.

“I hope that it shows we have a diverse group of kids,” Furman said. “We have many nationalities and boys and girls represented, and it shows that the program is growing.”

By GRAHAM BROOKS / Staff Writer HELENA–With the start of fall sports just a few weeks away, the organization that... read more