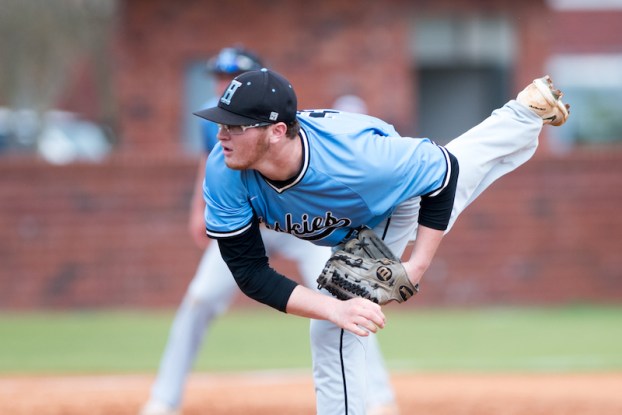 HELENA–One of the key players that helped Helena reach back-to-back Class 6A state championship games will be continuing his baseball career at Snead State Community College.

Pitcher Brooks Tolbert, who helped anchor a solid pitching rotation his final two years at Helena, will attempt to do the same thing when he steps on the field for Snead State.

For Tolbert, just getting to continue to play the game he loves was his main reason for signing.

“Honestly, it was just that I wanted to keep playing baseball and I heard about the great program Snead has,” Tolbert said. “I saw it as an opportunity to keep playing the game I love at a great school under a great coach like coach Casey Underwood. It’s just amazing that he is giving me the opportunity. It’s every kid’s dream to play at the next level one day.”

The dream of playing baseball at the next level, however, was nearly wiped away for Tolbert after dealing with a serious eye problem his sophomore year at Helena.

After waking up one morning with pain in his right eye, Tolbert figured he had gotten an eye infection and decided to visit an urgent care. After visiting the urgent care, Tolbert was told he had a corneal ulcer and the seriousness of the ulcer required a trip to the eye foundation in downtown Birmingham.

“By the time I was supposed to go to the eye foundation, I couldn’t open my eye or see out of it and it was dark in my right eye,” Tolbert recalls. “They ran tests and the next day I had an appointment, and I was told that I couldn’t do anything for a while. I asked about baseball, and the doctor told me that he didn’t think I would be able to ever play again. It didn’t hit me at first but it hit my mom pretty hard.”

In addition to the eye problem, Tolbert was already going through a setback because of a torn labrum injury which resulted in him not picking up a baseball until October of his junior year.

“Coach (P.J.) Guy was with me all the way through when I came back to school,” Tolbert said. “I had to stay in a dark room with no light to do my school work and he would just tell me, ‘We’re going to get through this and that this wasn’t the end.’ I didn’t get to start junior year but I overcame my eye injury after they told me I couldn’t.”

After working to regain his depth perception, peripheral vision and more, Tolbert made his way back to the mound and pitched in his first game in a relief appearance his junior year.

“I came in one of the games after Richard Fitts pitched and pitched like four innings or so,” Tolbert said. “Coming off the field, I just remember looking at coach Guy and him telling me that ‘it’s a miracle’ and that ‘you’re out here proving them wrong.’”

After making his remarkable recovery, Tolbert was more than just a member of the team. He helped the Huskies win the 2017 6A state championship by pitching in some crucial games and was a big reason they returned to Montgomery a season later. Tolbert said his favorite memory from Helena came during the semifinal round of this year’s playoffs.

“My favorite memory would definitely be pitching game three against Hillcrest in the semifinals this year to send us to the state championship,” Tolbert said. “Fitts and (Landon) Green had been taking care of teams in the earlier rounds of the playoffs and I finally got the next shot and I went out there and I just pitched the game of my life. There’s not a greater feeling than to pitch game three to get your team to the state championship for the second year in a row.”

When Tolbert leaves for Snead State in the coming weeks, he said he will be prepared because of the things the Helena coaching staff has taught him.

“I definitely would say that I learned to work hard and all the coaches taught us how to be great baseball players but even greater men,” Tolbert said. “They taught us to get through battles on the field and in life, and I feel like coach Guy prepared me and the guys to go to the next level.”

Tolbert will join his Helena teammate Braylon Moss on the baseball team at Snead State. He plans to major in mechanical engineering.