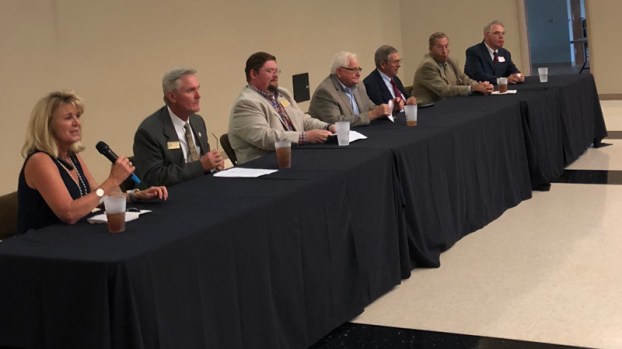 Seven mayors or their representatives gave updates on local municipalities during the South Shelby Chamber of Commerce’s monthly luncheon on Thursday, Aug. 2. (CONTRIBUTED)

COLUMBIANA – Seven mayors or their representatives gave updates on local municipalities during the South Shelby Chamber of Commerce’s monthly luncheon on Thursday, Aug. 2.

The city officials discussed topics ranging from park improvements to road work at the luncheon, which was held at Columbiana First Baptist Church.

Alabaster Mayor Marty Handlon noted the continuation of the Buck Creek trail system depends on completion of the road work at Thompson Road.

Handlon said a project to widen Alabama 119 to Veterans Park has been put on hold until the Alabama Department of Transportation can decide how to address an $8 million gap between grant funding for the project and its estimated cost.

Construction is beginning on a convenience store next to Hardee’s off Alabama 119, Handlon said.

Though a recreation center in the city had been discussed by city officials, it was determined that a new public safety building is a more significant need, Handlon said. So, the recreation center project will be delayed while a new police station and municipal court facility is built.

“Our police department has outgrown that area a long time ago,” Handlon said about the current police station.

Chelsea Mayor Tony Picklesimer said that a year ago, he talked at the Mayors Luncheon about the importance of cooperation among local government agencies and that this year he could share examples.

Projects are also in the works for the city’s middle and high schools.

“The reason these projects are happening is because we’re offering partnerships,” Picklesimer said.

“There’s something to be proud of in every city in Shelby County,” he said. “It’s the fact we work in Chelsea to maintain an attitude that it’s all about family.”

Picklesimer also addressed Chelsea’s efforts to purchase a sewer system operating in the city, noting that tap fees for businesses looking to locate in Chelsea are much higher than in neighboring municipalities.

City Clerk Mark Frey talked about Columbiana in place of Mayor Stancil Handley, who was out of town.

Frey touted the city’s new senior center, which is a hub of activity instead of a location for simply serving meals, Shelby County’s only municipal transit system, the annual Liberty Day celebration and other events.

At 30,000 square feet and with a price tag of about $10 million, the center is the largest project in the city’s history.

“The mayor and council are really looking to make Columbiana an entertainment destination,” Frey said.

Harpersville Mayor Don Greene touched on the “never-ending job” of paving projects, and the distribution of gas sales tax, which the town shares with other municipalities.

Greene also noted that work continues on the town-owned golf course in Harpersville. Nine holes of the course are expected to be open to the public in September, Greene said.

Harpersville is leasing the course to an operator.

The town’s water system was recently upgraded, Greene said, and a generator added to maintain power in emergency situations.

Also, Harpersville’s senior center is expected to open in the fall and will include a storm shelter.

Harpersville recently received a positive audit, and officials are planning for the annual Harpersville Day on Nov. 10, Greene said.

The event welcomed about 1,200 to the town for crafts, fireworks and more.

School supplies were collected for entry to the event and then donated.

The mayor also discussed efforts to improve Vincent’s park and said the town purchased 3 acres of land adjoining the park.

Another recent effort has been to bring a grocery store to the town after a previous store closed.

The old store property has been purchased, but city officials do not yet know what the plans are for the property, McAllister said.

“We’re working very hard to attract a grocery store to our community,” he said.

Westover Mayor Larry Riggins said the town is emerging from the economic recession that hit in 2008.

“We’re starting to see some things we’re excited about,” Riggins said. “We have a lot of things to be thankful for in Westover.”

One recent development has been the work of the Westover Business Alliance.

Challenges for the town include needed internet upgrades and cleaning up dilapidated structures, Riggins said.

More than 100 home sites were recently approved in Westover, the mayor said.

Wilsonville Mayor Lee McCarty said the town has a small but efficient staff.

“We have excellent people at every position we have,” McCarty said, specifically noting the town’s library, city clerk and public works departments. “Our little government in Wilsonville functions very well and very efficiently.”

McCarty also touted the town’s business community, Wilsonville Elementary School and its new pre-kindergarten program, and the town’s monetary match for a project to improve the bridge on Alabama 25 between Wilsonville and Columbiana.

“We’ve got a list of things going on that is just unprecedented for Wilsonville,” he said.

FROM STAFF REPORTS COLUMBIANA–The Shelby County Sheriff’s Office has announced a partnership with Hope’s Door to give more resources to women fleeing a... read more