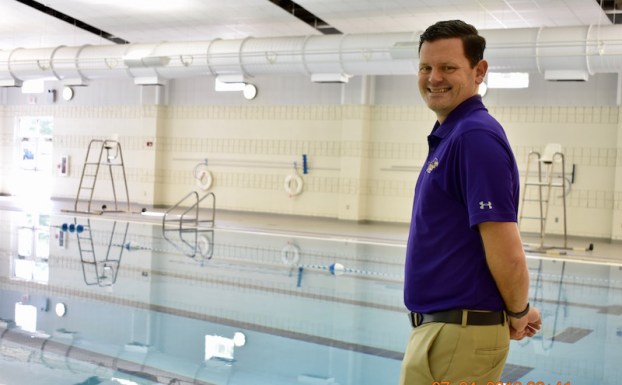 UM Swim Coach Aaron Mahaney in his new domain. (For the Reporter/Nancy Wilstach)

There’s a new guy in town, and he is guaranteed to make a big splash . . .

Aaron Mahaney, 38, is the first-ever University of Montevallo swimming coach. Coach Mahaney, who recently arrived in Montevallo from Buffalo, N.Y., by way of Mount Everest, is launching men’s and women’s competitive intercollegiate swim teams at the NCAA-II school.

You see, UM has this lovely pool in the McChesney Student Activity Center, but not much activity was happening in it beyond some physical education classes, some water aerobics and visits from the Boys and Girls Club youngsters.

Coach Mahaney plans to liven things up. From his office beside the pool, he already has started getting the word out that the swim teams will begin competing in the 2019-2020 academic year as part of the New South Intercollegiate Swim Conference.

Although the first swimmers have not yet stepped up onto the blocks (in fact, the blocks themselves are not here yet), the swimming Falcons already have a presence on social media. “MontevalloSwim” takes you to the Facebook page and the Twitter feed, and then there’s Instagram and Snapchat.

“I sent emails to all the schools that have swim teams,” Mahaney said, “as well as the YMCA teams.” He sees all of Alabama, as well as parts of neighboring states as his primary recruiting territory.

Things have fallen into place rapidly for the Michigan State four-year letterman. Mahaney coached the men’s team at the University at Buffalo until the program was cut in April 2017. Mahaney took a “gap year” that included a trip to the base camp at Mount Everest in Nepal.

“I had just started looking for a new job (when UM posted the new coaching position),” he said. One Skype interview later, and Mahaney had a change of latitude.

Before his four years in Buffalo, he spent five years at Penn State and three years at the University of Hawaii.

“I was in the water before I could walk,” he said. His event was the 200-meter butterfly, and he also was a distance freestyler.

Mahaney is not just looking for trophies and championships; he has other goals.

“I am looking for the ideal student athlete,” he said. “With this first team we need to lay the foundation to build an outstanding program. I want to see a good GPA and community service. After four years here, most will be doing something other than swimming.”

Besides scouting school and club swim teams for potential, Mahaney hopes for interest among students already on campus.

Sports Information Director Wesley Hallman noted that the GPA may be the most important statistic in Falcon athletics.

By NANCY WILSTACH / Community Columnist The new chief of the University of Montevallo Police needs no introduction . .... read more