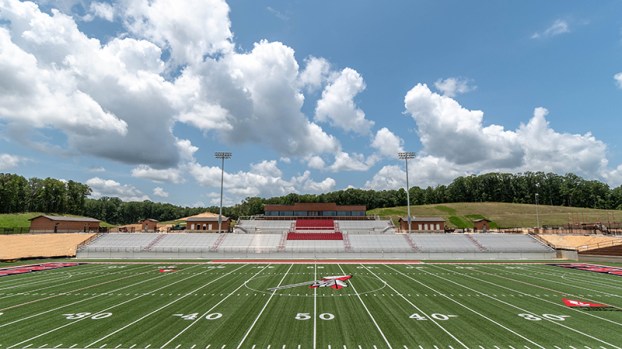 Thompson High School will hold a commencement on May 19 at Warrior Stadium with social distancing guidelines in place, allowing for 2,500 guests. (FILE)

ALABASTER – The newly constructed Warrior Stadium on the campus of the new Thompson High School will be ready to welcome fans for the THS football team’s first home game in September, as the Alabaster City School System recently received its certificate of occupancy for the stadium.

The state building inspector signed off on the certificate of occupancy for the 5,293-seat stadium itself following a recent inspection, paving the way for the facility to be used by the Warrior football team. The certificate of occupancy currently includes only the stadium, as crews are still working to finish the adjacent 30,000-square foot fieldhouse and other athletic fields.

As a result of receiving the certificate of occupancy for the stadium, the THS football team will now be able to hold regular practices there.

THS will begin the season playing James Clemens out of Madison in the Alabama High School Athletic Association’s Champion Challenge at Montgomery’s Cramton Bowl on Aug. 24. The Warriors will then travel to Foley in Baldwin County on Aug. 31 and then will begin region play by traveling to Hoover on Friday, Sept. 7.

Following the Oak Mountain game, Thompson will travel to Tuscaloosa County on Sept. 21, host Spain Park on Oct. 5, host Vestavia on Oct. 12, travel to Mountain Brook on Oct. 19, host Hewitt-Trussville on Oct. 26 and travel to Crestview, Florida, on either Nov. 1 or Nov. 2.

ACS also recently received certificates of occupancy for the indoor basketball arena and the performing arts center, both of which are attached to the main THS academic building.