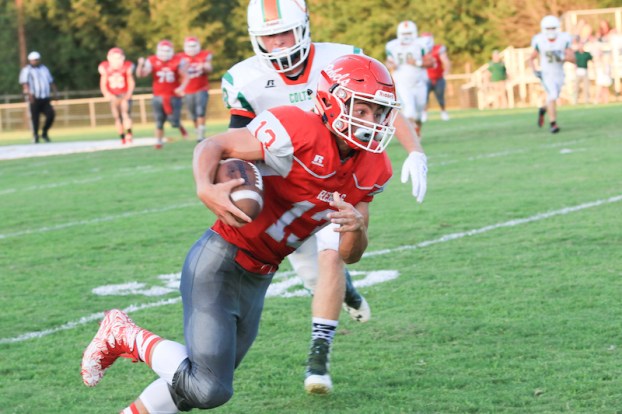 Coosa Valley has an exciting new head coach in Jamie Scruggs, and now the expectations are there for the Rebels to have a special season in 2018. (File)

A popular name around the county has made his way to Coosa Valley Academy for the 2018 football season. Jamie Scruggs, who has made stops at Calera, Chelsea and Vincent, was named the new coach of the Rebels this past spring and has hit the ground running to turn this program into a title contender.

Scruggs has brought excitement and players into the program that is leading to a lot of expectation for the 2018 season.

The Rebels are loaded with coachable athletes, which is helping make the job easy for Scruggs in his first stint as a head coach.

Starting on the offensive side of the ball, Scruggs is excited about freshman quarterback Brayson Edwards, who has an extremely high ceiling. Standing at 6-foot-1 as a freshman, Edwards already has a good quarterback frame and still plenty of growing to do.

While he still has plenty of learning to do at the position, Edwards has an accurate and powerful arm. If he takes a hold of the offense early as a leader, the Rebels could be on their way to a special season.

They’ll lose running back Lew Dale, who went over 1,000 yards on the ground last year with six touchdowns, but Kaleb Allen will take over. Allen got a lot of time at different positions last year and stands at 6-foot-1, 215 pounds, which makes him a bruiser of a back with speed.

Coosa Valley will also have a lot of speed at the receiver position starting with Tripp Allen in the slot. He’ll be joined by Jacob Brooks in the slot as well. Both of those guys can do multiple things and will be in an H-back role. Other receivers will include Reid Maddox and Jackson Bryant, who give good deep threats for Edwards.

A big reason for excitement about those skill players is thanks to the offensive line that will give them the time to allow plays to develop. The average size of the line is around 270 pounds with guys like Brodie Williams, Drake Styles, Jacob Laddie, Johnny Cates and Sammy Shepherd holding spots at the position.

Most of those guys will play on the defensive line with Shepherd and Williams handling spots on the end due to speed and agility.

Coosa Valley will also be in a 3-4 type defense, which should create for more depth on the line, but makes the linebacker position extremely important.

Brooks, Kaleb Allen, Logan Cairnes, Cole Davis and Bailey Deshazo will be the four guys rotating at the position and are guys that have Scruggs excited.

Rounding out the defense will be a secondary that should make some big plays as well. During summer 7-on-7s, the unit was intercepting balls with ease. With guys like Tripp Allen back as well as help from Maddox, Bryant and Christian Marler, it’s hard to see a lot of deep passes or big gains.

Prediction: Last year’s 3-8 team just missed out on a spot in the playoffs. This year, however, they should make the leap into the postseason for the first time since 2013. I see the team going at least 3-2 in region play and possibly even better depending on how the players grow this season. Overall, I could see a record of 6-5 in the regular season, but wouldn’t be surprised by anything better. If this team is healthy and clicking heading into the playoffs, they could be an exciting postseason threat.

By ALEC ETHEREDGE | Sports Editor Coming off a 1-10 season in Todd Bradford’s first year as a head coach,... read more