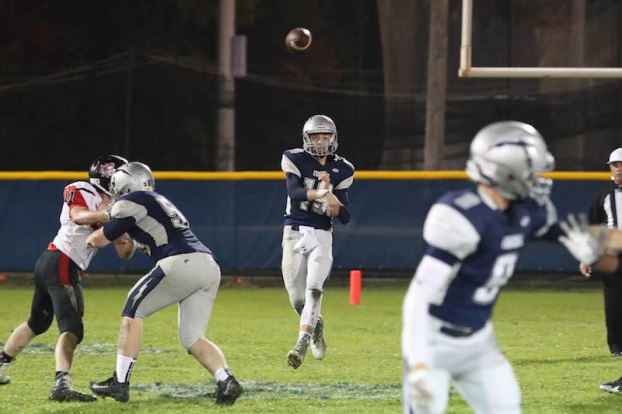 The Evangel Lightning will be looking to win their eighth state championship in the last nine years heading into the 2018 football season. (File)

Despite losing 15 seniors off of that team, the Lightning are stacked again this year with several young returning starters who made plays a season ago, as well as other newcomers ready to step in and fill important roles.

One of the best returnees on this year’s squad will be quarterback Tyler Henderson, who stands at 6-foot-5 and has a powerful arm. Henderson will be a junior this season and has made a name for himself, throwing for close to 3,000 yards through two years as a starter at Hope and Evangel.

Joining him as a productive skill player in the backfield will be returning sophomore Will Ferrell, who created a ton of excitement last year, specifically in the state championship game, where he ran for four touchdowns.

One of the biggest losses for Evangel this season will come out wide with the departure of senior Coleby Henderson, who totaled 901 yards and 10 touchdowns on 45 receptions last year.

Though his brother has graduated, Tyler Henderson will still have some talent to throw to this season. Seth Harrison, a starter last year, will be back to lead the receiving corps, while Yura Gothard and Nate Arvizu will help out in different ways.

Blocking for that talented group of skill players will be what Smith says is one of the most exciting units on the team. The offensive line will feature big bodies in Samuel Graham, Braydon Johnson, Jared Warren and Jahmad Quillman, while Zach Rickles, Tanner Parks, Logan West and Noah Murdaugh will also compete for jobs.

All are very impressive and will also anchor spots in the defensive line, giving the Lightning plenty of depth.

One of the biggest losses for Evangel this season will be John Lloyd, who was one of the best linebackers the team had ever had. He totaled 96 tackles, 11 sacks and 10 tackles for loss last season, which has left a big gap to fill this season.

The Lightning will, however, have defensive MVP Hunter Green back on this year’s team, which should make the impact of Lloyd’s loss less drastic. Green ended 2017 with 79 tackles and six sacks, and will be the defensive leader this year.

He’ll anchor the linebacking unit and will be joined by Will Parker, Daniel Viles and Murdaugh, which makes this an exciting position to watch.

They’ll need to be on top of their game due to the lack of experience in the secondary.

The back end of the defense will lose starters Coleby Henderson and Kamden Smith, but some athletic guys are ready to step up. Harrison, Ferrell, Arvizu, Gothard and Carter Hand will all spend time in the secondary and boast a lot of speed and skill.

Prediction: Betting against Evangel to win the ACSC title yet again would be unadvisable. Smith proved he had what it takes to lead this team in year one, now heading into year two, you would expect an uptick. Last year, the Lightning finished 9-2. In 2018, I expect no worse than two losses, but could see a 9-1 regular season, and definitely see another ACSC state championship in their future.