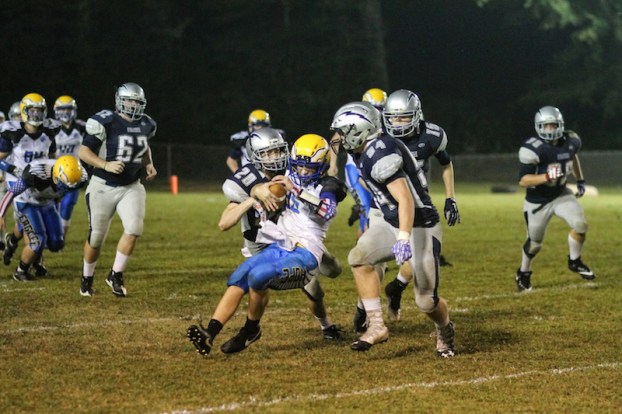 Hope Christian won't be competing in the ACSC this season, but has an inspired group of players regardless. (File)

A new year brings new and interesting challenges for the Hope Christian Eagles in 2018.

With several players having graduated or transferred to other schools, the Eagles will only field around 12 players for the upcoming season, which keeps them from competing in the ACSC conference due to not meeting the minimum requirement of 15 players.

For that reason, Hope will not be competing in a conference this season, but will instead be competing against random opponents, both in and out of the state.

The idea of competing in a 6-man league was there for a while, but they couldn’t get into a conference in time.

So for this upcoming season, the Eagles will test out different teams and what the move will be going forward.

It’s a testament to the players, however, who weren’t going to just sit on the sidelines and not play this year. According to head coach Matt Davis, none of his players wanted to take the year off, and wanted to find a way to do what they love.

After posting a 3-6 record a season ago, and with Davis heading into his second year at the helm, Hope should be in good shape to have an improved season in 2018.

The Eagles will play eight games this year, including a 6-man game and two teams that they were able to beat rather handily last year.

Quarterback Jackson Davis is back to run the show for his senior season and will split time with Noah Seiger at the position to allow for breathers and rest since most of the team will be playing on both sides of the ball for the majority of the game.

Having a returnee at quarterback will pair nicely with a speedy run game the Eagles hope will spark an offensive outburst. Wesley Holsomback, Noah Douglas, Reece McGee and Evan Key will all help at the position.

That speed will transition over to the receiving corps as well. Junior Josh Baize will be the only returner to the position and is primed for a big season. The hope is for Baize, and other newcomers, to create a bigger downfield threat this season to create more space for the run game.

The offensive line will feature some solid and capable bodies with Willie Wade, Wayne Conley and Jacob Dorris all helping out up front.

While they’ll have some beef on the offensive line, the goal for the entire defense is to be fast to create pressure on the quarterback.

Starting in the front seven, Matt Davis is hoping his team can get some speed off the edge at defensive end with the goal of eliminating any downfield threat. Douglas and McGee will be two players relied on to do that.

That will transition to the linebacking corps, who will also be called upon to be speedy to get after the quarterback, but also hold their own in the middle of the field to sure up the running and pass game.

As long as the secondary is able to keep its energy due to playing so much on both sides of the ball, it will be a strong suit to this year’s team.

Baize and Jackson Davis both played at cornerback last year and will return to the position this year. Blayton Tierce and Logan Overton are two players with high football IQs that will help out on the back end of the defense as well.

Prediction: Hope should definitely be improved this season with Davis going into his second year as the coach. That along with a schedule that doesn’t feature difficult region opponents, should let these guys play freely throughout the year. I see them going 4-3 through the first seven games and having the chance for a 5-3 season in their final game. A realistic expectation should be 4-4 for the Eagles this season.

PHS field house to be completed in September

PELHAM – The construction of a new field house at Pelham High School is expected to be completed shortly after... read more