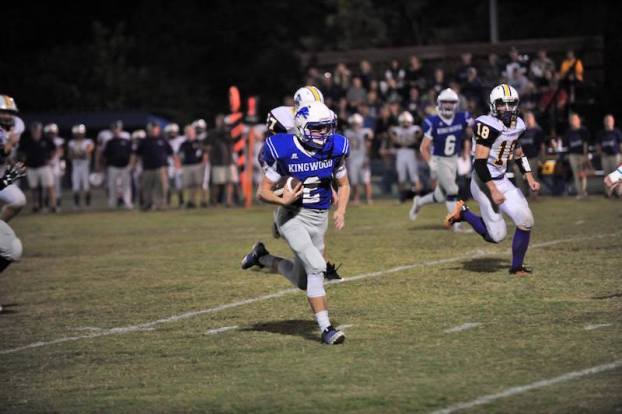 Kingwood is looking to improve under second-year head coach Todd Bradford, and despite a difficult region, the Lions will have their chances this season. (File)

Coming off a 1-10 season in Todd Bradford’s first year as a head coach, the Kingwood Christian Lions have been rewarded with a jump into one of the most difficult regions in the AISA.

The Lions not only move up to the AAA classification from Class AA, but also transition into Region 1. It’s a region where all five of Kingwood’s opponents finished .500 or better in 2017, and one of those teams, Bessemer Academy, went on to compete in the state championship game despite not even winning the region championship which went to Tuscaloosa Academy.

Bradford seems optimistic this summer simply due to the buy-in of his players. He has already seen a drastic difference in work ethic from last year to this year.

While the Lions will return several key offensive playmakers, the defense needs a major shift in focus after giving up 45.7 points per game last year.

Offensively, however, the excitement starts with the return of Garrett Picklesimer at quarterback. Last year, Picklesimer found himself in a battle for the starting job, but in 2018, he is the undoubted leader at the position, which will give Kingwood much more confidence offensively with trust in one guy.

To help take some of the pressure off Picklesimer, Peyton Long will take over at running back after transferring from Hope Christian. Long played extremely well against the Lions last year, but will now be helping them out moving forward.

Leading receiver Toni Ruiz will also be back this year, which will give Picklesimer his go-to target. He’ll be the main guy, but Parker Foshee, Felipe Minderhout and Connor Shaddix will also be key contributors that can play all over the field.

The biggest question mark on offense will be up front thanks to several offensive linemen transferring or graduating. Austyn Franklin, Boston Bush and Carl Sellers are the three leaders at the position.

Franklin can also move back to play some outside linebacker, while Long and Jayton Denard will be the two core linebackers. As powerful running backs, they are poised for good years on both sides of the ball.

The good news for the front seven is that they’ll have a solid back line of defense in the secondary to help out. Ruiz will return to the position and has spent the last two seasons as the Lions’ best cornerback. He’ll be joined by Foshee at cornerback, while Jacob Bradford will handle strong safety and Minderhout or Picklesimer will battle for the other safety spot.

Prediction: This year’s Kingwood team should be much improved from last year’s 1-10 team, but improved enough to handle the toughest region in the AISA may be a different story. I don’t see this team ever giving up, and there are some games that could go either way, but I see a 3-7 regular season being the expected regular-season record in 2018.

By ALEC ETHEREDGE | Sports Editor A powerhouse amongst the ACSC, Evangel Christian School will be looking to win its... read more