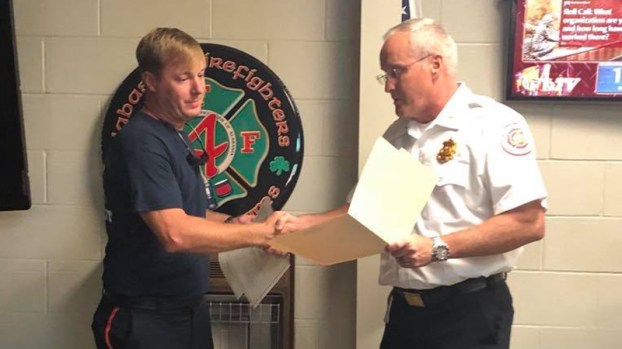 Alabaster Fire Chief Tim Love, right, presents a letter of commendation to firefighter Brian Thrasher on Aug. 8 honoring Thrasher’s efforts to save a drowning victim in the Gulf of Mexico. (Contributed)

Alabaster firefighter pulls drowning victim from ocean while on vacation

ALABASTER – An Alabaster firefighter received commendation from the department’s chief on Aug. 8 after he made every effort he could to save a victim caught in strong ocean currents on the Florida coast in late July.

While on vacation with his family in Mexico Beach, Florida, on July 23, Alabaster firefighter Brian Thrasher witnessed a person trying to rescue a victim caught in strong ocean currents in the Gulf of Mexico waters.

Thrasher and his brother were able to reach the victim and pull him to dry land before assessing the victim and beginning CPR, which he continued until local emergency responders arrived.

Tragically, the victim later died as a result of being trapped underwater for so long, despite emergency responders’ attempts to save him.

However, Thrasher’s quick action and attempts to save the victim gave the victim a greater chance of surviving the ordeal, and exemplified the values of the Alabaster Fire Department, said department Chief Tim Love.

“That’s a good projection of our department and our values. He did exactly what we want all of our guys to do,” Love said. “He extended the same level of care to a perfect stranger in that situation as he would if he was responding to a call up here. He did everything he could to save the victim.”

After hearing about Thrasher’s actions from one of the department’s lieutenants, Love presented Thrasher with a letter of commendation honoring “his selfless actions, professionalism and dedication to provide care and assistance to a stranger in need,” and also nominated Thrasher for the Greater Shelby County Chamber of Commerce’s Firefighter of the Year honor, which will be awarded in September.

HOOVER – The first day of school can be a trying time for students, teachers and administrators, but a strong... read more