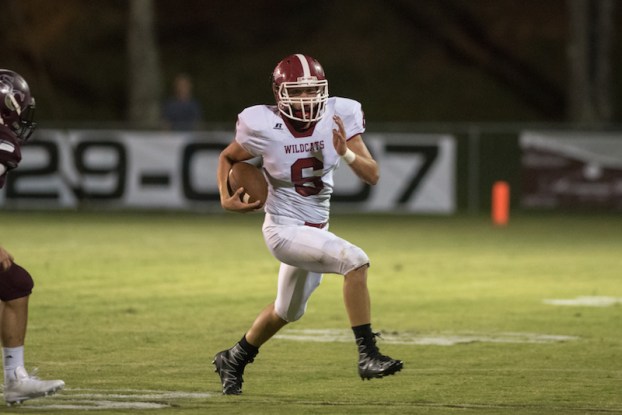 The Shelby County Wildcats will open the 2018 football season looking to make a run at their first playoff berth since 2009. With a different region, that possibility is squarely in the picture. (File)

This will be an interesting season to watch unfold for the Shelby County Wildcats with the last thing in people’s mind being a fight against Jemison on the field to end the 2017 season.

With that said, head coach Heath Childers has tackled the issue head on and the appropriate changes have been made—a process that started just a few days after the end of last season.

Now, heading into the 2018 season, the Wildcats have a new attitude, a new work-ethic, a hungry team ready for redemption and a new region that will give them a chance at their first playoff berth since 2009.

It’s a region that will feature just two teams that finished above .500 last year in Bibb County and Demopolis, which leaves the third and fourth playoff spots wide open for the other five teams.

Who will be leading the team at the quarterback position is still up in the air, as junior Chase Holliman and sophomore Kaden Cardwell have been in a battle this summer heading into fall practice.

Holliman played some at the position last year, while Cardwell is the more athletic of the two. Childers said he feels comfortable in both players, but not turning the ball over will be the biggest key at the position.

Shelby County has been an option team under Childers, which places an emphasis on the quarterback and running back. Just like the quarterback position, there is a slight bit of uncertainty at running back this season due to graduates and transfers leaving the program.

There are several athletes that will make their pitch to be playmakers in the backfield. Nevada Wages, Austin Scott, Tyrese Goodman and Raheem Montgomery will all add different running styles that will come in handy this season.

Every season, we think the Wildcats will open up the passing game more, but tend to stick to the run more often than not. This year, it may be time to take the chance.

The reason for saying that is the emergence of sophomore Isaac Montgomery, who Childers is very high on. Montgomery had an impressive spring and brings great speed and athleticism to the table. There is no question he will have several opportunities each game to make plays.

Chase Franklin, as well as Goodman, Taylor Wilkins and Ericsson Goodman will all help Shelby County in the passing attack this season.

Blocking for that group of players will be an impressive cast. The return of twins Dalton and Dawson Brooks at right guard and left tackle, respectively, will be invaluable. Those two are great leaders with several years of playing experience.

J.T. Pennington, Tre Aderholt and Hunter Barnes will join them, while impressive tight end Jessup Lodge will help in the passing and blocking game.

On the defensive line, the Wildcats will use a three-man front that will feature Micah Hughes and Dawson Brooks at defensive end, while Devon Montgomery will start at nose guard.

The other twin, Dalton Brooks, will be playing linebacker behind his brother and will be joined by Barnes, Raheem Montgomery and Scott. Those guys will switch out at inside linebacker, while the outside will consist of Franklin, Wages, Aderholt and Landen Stewart.

Cardwell and Holliman will handle cornerback on the defensive side, while Ericsson Goodman, Tyrese Goodman, Austin Dunn and others will help out at safety and cornerback.

Prediction: There are two difficult region games that will be tough for Shelby County, Bibb County and Demopolis. Outside of that, almost every game on their schedule is a toss-up that the Wildcats should have an opportunity to win. Last year, Shelby County finished the season 3-7 after starting 3-2 through their first five games. This year’s schedule should help that record improve, and if the Wildcats get off to a similar start, they’ll make the playoffs. I think a record of 6-4 is very plausible. It could be better or worse depending on how some of those toss-up games go, but the Wildcats will be in position to battle for the third and fourth playoff spots in the region.

By ALEC ETHEREDGE | Sports Editor On paper, the Montevallo Bulldogs are making the move from Class 3A up to... read more