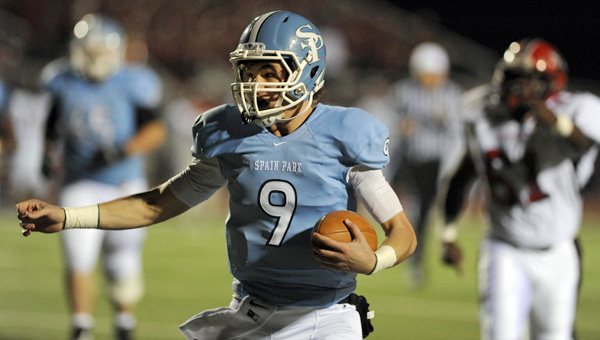 Former Spain Park standout Nick Mullens led the San Francisco 49ers to a come-from-behind win against the Dallas Cowboys in the first preseason game of the season on Thursday, Aug. 9. (File)

SANTA CLARA, Calif. – With pressure coming off the right edge and 20 seconds left in the San Francisco 49ers’ first preseason game of 2018 on Thursday, Aug. 9, former Spain Park quarterback Nick Mullens stood strong in the pocket on first-and-goal from the 7-yard line and fired a bullet between two defenders directly to wide receiver Richie James.

Trailing the Dallas Cowboys the entire game and down 21-16, James hauled in the 7-yard touchdown catch to not only give the 49ers their first lead of the game, but the former Spain Park quarterback a game-winning touchdown pass with 18 seconds left.

Mullens went running toward the back of the end zone, jumping with joy, before joining his teammates in celebration behind the goal post.

Just to be safe, San Francisco also attempted a 2-point conversion to make it a field-goal game with little time remaining. Mullens got the call again and on a play action, was able to back pedal before throwing a tight spiral over a defender in pursuit that found the hands of fifth-string tight end Wes Saxton for the conversion.

The game-winning drive capped off an almost perfect night for Mullens who finished the game 11-13 passing with 141 yards, one touchdown and one interception.

Mullens entered the game with 3:03 left in the third quarter and led the 49ers on an impressive drive into Dallas territory, before a fumble from Raheem Mostert turned the ball over.

On San Francisco’s next drive, Mullens got them back into Dallas territory for the second drive in a row, but this team he turned the ball over when he threw an interception into the hands of Duke Thomas.

After the Cowboys missed a field goal on the next drive, however, Mullens and the 49ers’ offense came together and put the mistakes behind them.

Mullens completed passes of 11, 9 and 24 yards on the drive, before Jeremy Nichols capped off the drive with a 1-yard touchdown run.

After forcing a Dallas punt on the ensuing drive, Mullens and the San Francisco offense went back to work in the two-minute drill with 1:42 to play looking for the victory.

“You know you’re going to pass and I like to pass of course,” Mullens said of the two-minute drill.

And pass he did.

Mullens competed passes of 9, 14, 26, 4 and 9 yards with no incompletions on the drive. After stringing those five completions together, the Cowboys were flagged for pass interference, which set up that first-and-goal from the 7-yard line that ended with Mullens’ game-winning touchdown.

“The receivers did a great job,” he said after the game. “We were just very in tune and locked in. We walk through that every single day of camp and it’s cool to see it translate to the field.”

Mullens is part of an impressive quarterback crew in San Francisco and has had the opportunity to work with Jimmy Garoppolo, who many experts think will be the next big quarterback in the NFL.

“We all learn from Jimmy, he obviously is the most experienced and plays very well as a quarterback so we learn as much as we can from him,” Mullens said. “It’s a lot of fun. It makes camp a lot more fun when your around guys you like.”

While it has been fun to be part of a great group, Mullens is also battling to make sure he stays with the team, which made a performance like that key.

“For me it’s been since last year, last preseason, since I got to get out and play, so it’s awesome to take advantage of the opportunities,” Mullens said.

At Spain Park, Mullens threw for 8,605 yards under current Auburn offensive coordinator Chip Lindsey, before going on to throw for 11,994 yards at Southern Miss.

By ALEC ETHEREDGE | Sports Editor This will be an interesting season to watch unfold for the Shelby County Wildcats... read more