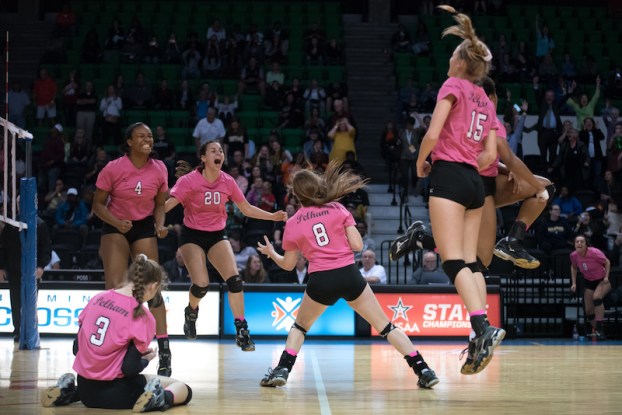 Pelham will compete this season looking to defend the Class 6A state championship after a thrilling win in the title game last year. (File)

It’s never easy going into a new season as the defending state champion because a target is squarely placed on your back, something the Pelham Panthers’ volleyball team will experience in 2018.

After a thrilling run to the 2017 Class 6A State Championship, the Panthers go into the new year hoping to wipe the slate clean, put that behind them and focus on what’s ahead.

“Hopefully we can put it behind us,” head coach Perry Robinson said. “That’s what last year’s team did. They were a team that didn’t worry about past or future and just went into the gym every day to put in the work to be the best they could be.”

The loss of stars Emorie Long and Jamila Wilson will be two key pieces to the puzzle missing from this year’s squad, but Pelham will return four of its best players in Erin Long, Georgia Stonicher, Josie Hester and Sarah Guthrie.

“I think we are looked at as the leaders because of the seniority and the experience,” Stonicher said. “So we need to be dependable and show the younger players how to do what it takes to compete against the best teams in the state.”

Those leaders are the ones Robinson hopes the rest of the team will learn from as the season goes along.

“We graduated quite a bit so we are trying to put things together right now, but we have a solid group back that are helping the new ones get up to speed,” he said.

The other hurdle for the Panthers to overcome is going to be a difficult area that not only features top 10 caliber teams like Chelsea and Helena, but now adds Calera into the mix as well, who made the playoffs last year.

“I think we have the hardest area in the state in 6A,” Robinson said. “Helena went to the elite eight last year and Chelsea won the area two years ago. Whoever comes out of our area is probably going to be pretty good.”

Helena’s only losses in the postseason last season came to two eventual final four teams in Daphne and Jasper, who lost to Pelham in the state championship. And although Chelsea didn’t make the postseason last year, the Hornets were a 30-plus win team that got the wrong end of the deal in the difficult area.

Robinson knows it is going to take a certain resiliency for this team to handle the pressure of that area, while also defending its title.

“We were 6-1 in five-set matches down the stretch of last year, which says everything we need to know about last year’s team,” Robinson said. “We were always on the same page. That was one of the best teams I had because of their effort, and that’s all this team has to do to be good, is put in the work and have that resiliency and effort every night.”

Guthrie, Hester and Stonicher all referenced the new and different team they will have this season, but they also added that they are taking the bull by the horn and stepping up to show this team what it’s going to take to be great.

“Right now we have really good chemistry so I don’t think having a target on our back is going to bother us,” Guthrie said. “We need to find each other’s strengths and weaknesses, and build off of that.”

It’s going to be a long trek, but there is no reason to doubt Robinson and his strong cast of leaders back on this year’s team.