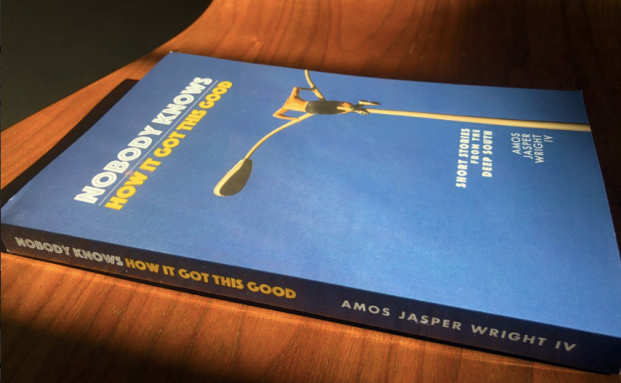 PELHAM – Hot off the press comes a collection of 16 short stories, called “Nobody Knows How It Got This Good,” written by one of Pelham’s own, Amos Jasper Wright IV.

The book, published in July 2018 by Livingston Press and winner of the Tartt First Fiction Award, is set in Birmingham and explores the themes of civil rights, suburbanization, environmentalism, religion, historical memory, imprisonment, atonement for past wrongdoings and other urban social issues.

Regardless of a reader’s background, all of the stories are about events affecting the lives of everyone in central Alabama, if not the state at large. The stories are derived from a mixture of personal experience, “imaginative departures from shared reality,” and local historical events, such as the terrorist bombing of the 16th Street Baptist Church or the more recent bankruptcy and sewer debt crisis in Jefferson County.

However, it is not meant to be a memoir or autobiography, but a work of fiction.

“These are all very abstract terms that have to be translated into fictional conflicts that resonate with readers on more than a didactic level,” Wright said. “At the same time, the stories hopefully are not soapboxes for the preaching of ideology or orthodoxy, but modern iterations of immemorial themes which writers have contemplated for ages.”

Whether the book succeeds on those terms is something for the reader to decide, Wright said.

Local readers can expect to read about Alabama in ways that are recognizable and probably unrecognizable, depending on the reader’s experiences. Wright said the places, streets and public figures mentioned should be familiar to residents of the Birmingham metro area.

The stories were written between 2010 and 2013, while Wright was living in Birmingham and Boston. It was at a time when he was developing an interest in urban history and psychogeography as a method.

“Because of the prolonged timeframe of publishing – the delay between writing and publication – the stories in this collection are now somewhat distant from their origins,” Wright said.

He said his intent was never to write a collection of short stories. It was a process that happened naturally.

“Gradually, common themes, characters, settings, images and conceptual concerns emerged among entangled stories, oftentimes unconsciously, and I eventually realized I was dealing with a story collection,” he said. “Sometimes one is at the mercy of the story, not the other way around – the story appoints you and all you can do is show up and tell it.”

He started writing short stories after a mentor suggested that he “master or at least develop some respectable level of competency” with writing shorter narratives before tackling longer projects.

“Novels almost come easily to me, because I simply cannot shut up – an editor’s worst nightmare,” he said. “Some of the stories in this collection are long enough that they could have been developed into novels; others simply didn’t have the gas to complete the distance required of a novel.”

Wright has several unpublished novel manuscripts, but he recently completed a draft of a novel set in Tuskegee. It’s about the infamous and unethical medical experiments conducted on impoverished African American men between 1932 and 1972 by the U.S. Public Health Service.

He’s now working on short stories set in New Orleans. The same themes and issues in Nobody Knows How It Got This Good can be found in these stories with the removal of “Confederate zombie statues,” the post-Katrina legacy and the many social justice and equity issues which distress the city such as chronic flooding, housing affordability, homelessness, gun violence, police brutality, corruption and much more.

“Again, the conundrum for me is translating these abstract problems into cogent, relatable fictions,” Wright said. “Although homelessness or gun violence may be abstractions, they have tangible consequences for real people.”

Wright graduated from Pelham High School and went on to earn an M.A. in English with a concentration in creative writing from UAB in 2011. He received an M.A. in urban and environmental policy and planning from Tufts University in 2013.

Nobody Knows How It Got This Good is available from Amazon, Barnes & Noble, Target, Small Press Distribution, Livingston Press and elsewhere.